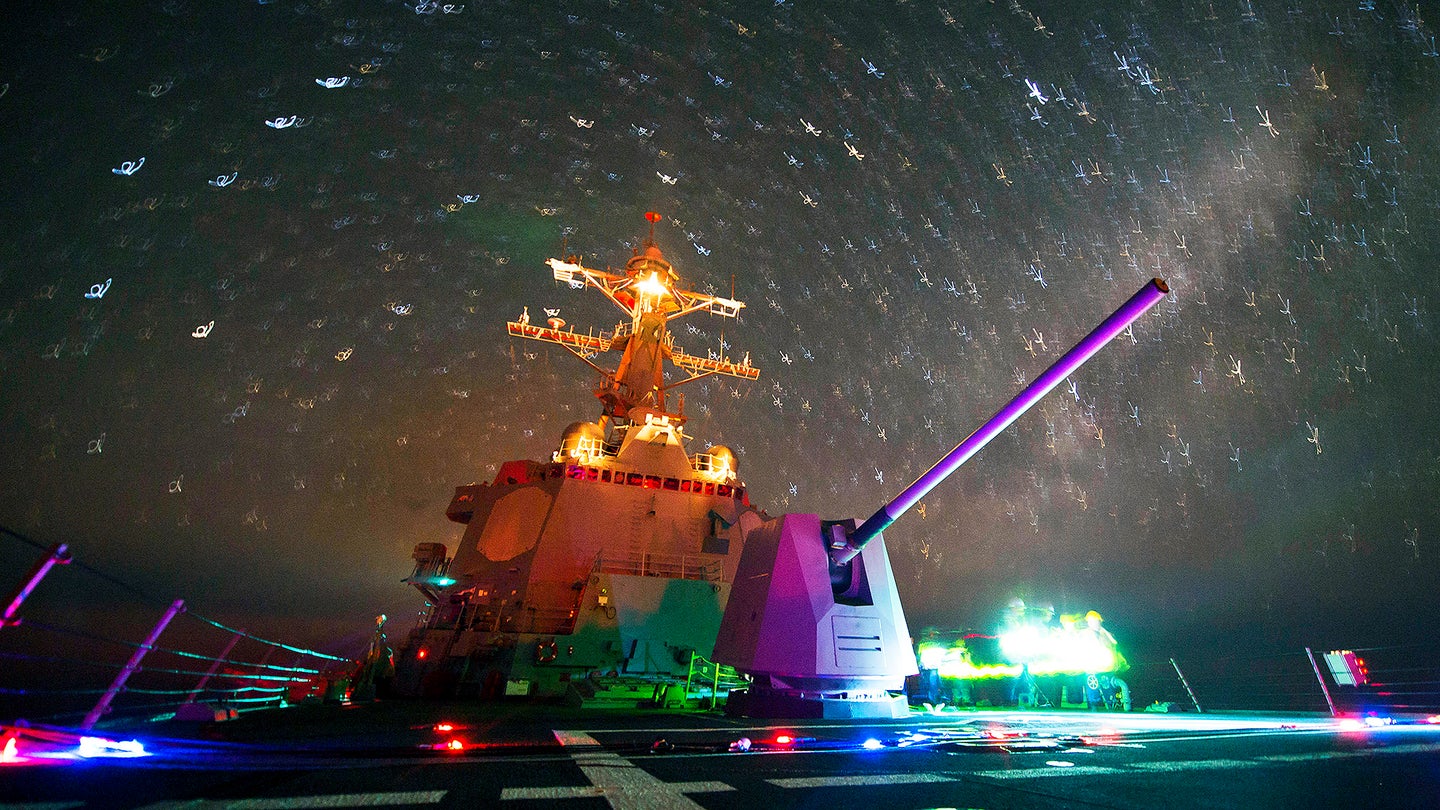 After intense public speculation, stacks of official documents obtained via the Freedom Of Information Act, ambiguous statements from top officials, and an avalanche of media attention, it has now been made clear that the mysterious swarming of U.S. Navy ships off the Southern California coast in 2019 was caused by drones, not otherworldly UFOs or other mysterious craft. Raising even more questions, a similar drone swarm event has occurred off another coast, as well. These revelations came from top Department of Defense officials during a recent and much-anticipated house hearing on UFOs, which you can read all about here.

The strange series of events in question unfolded around California’s Channel Islands in July of 2019. On multiple evenings, swarms of unidentified drones were spotted operating around U.S. Navy vessels. In numerous instances, the drones flew within close proximity to ships, even crossing directly over their decks. The behavior provoked defensive reactions from the ships, including the deployment of emergency security teams and, in later instances, radio frequency-based counter-drone technology. Early investigations into the incidents by Navy intelligence and the Federal Bureau of Investigation surfaced few answers and appeared to fade away without any firm conclusions.

Shortly after The War Zone reported the incidents in-depth last year, leaked footage of some of the incidents surfaced online. National media took an intense interest in the video clips, which depicted a triangular light flying over the ships as seen through night vision scopes. The unusual appearance of the objects and their behavior fueled speculation that the objects were otherworldly UFOs or some type of truly exotic craft.

In our coverage of these incidents, we found increasingly clear evidence that the objects were drones. Numerous ship deck logs from the earliest incidents referred to the objects as UAS, UAV, or plainly as drones.

We later learned through the Freedom of Information Act that briefing slides from the USS Paul Hamilton were created shortly after one of the incidents. Those slides again referred to the objects as UAS, UAV and as a “UAS Swarm.”

Investigators, who were in a position to have a first-hand description of the objects, questioned civilians believed to be in possession of drones and in proximity to the ships at the time of the incident.

In parallel, investigators also sought to deconflict with the Navy’s own drone operations in the area. Flight logs shared with the investigators appeared to rule out a case of mistaken identity with Navy assets.

Drone incidents continued to occur even after the launch of the Navy’s initial investigation. Deck logs again referred to the objects as drones and indicated that radiofrequency signals had been detected from them.

Deck logs demonstrate that the Navy appears to have drilled and implemented a variety of counter-drone techniques in response to these incidents. This eventually included the deployment of Northrop Grumman’s Drone Restricted Access Using Known EW (DRAKE) platform. The DRAKE system is a man-portable backpack that allows sailors to use radio frequency signals to interrupt the control links of drones. The DRAKE system appears to have been actually deployed in one of the incidents.

In April of last year, Jeff Schogol of Task & Purpose asked Chief of Naval Operations Admiral Michael Gilday about the incidents. At that time, Admiral Gilday confirmed that the incidents were still unresolved, and that other similar incidents had occurred. Schogol also addressed speculation about a potential otherworldly origin of the objects and asked if there was any suspicion that the aircraft described as drones were “extraterrestrial.” Gilday responded, “No, I can’t speak to that – I have no indications at all of that.”

This Tuesday, more than a year after the story broke, the Department of Defense and Navy further clarified that the objects in these incidents were in fact drones in the aforementioned House of Representatives Intelligence, Counterterrorism, Counterintelligence, and Counterproliferation Subcommittee hearing.

Scott Bray, deputy director of Naval Intelligence, played a video of one of the 2019 incidents in his opening remarks as an example of a solved UAP case. Mr. Bray explained that the footage from the 2019 event was “unresolved for several years.” After an entirely separate series of drone swarm events occurred “off a different coast,” the Navy was able to compare night vision footage and other data to determine that both incidents were caused by drones. Bray characterized their level of certainty as “reasonably confident,” and explained in later testimony that the group in charge of investigating the event was aware of studies that had replicated the relevant conditions.

Bray stated that the aperture mechanism of the night vision scope created an optical effect responsible for the triangular appearance of the drones. Similar conclusions were reached by civilians shortly after the video was first leaked, notably by Mick West, who frequently analyzes purported UFO cases.

The committee did not ask any further clarifying questions about the incidents, so it remains unknown when and exactly where the second drone swarm event or events occurred, or what it entailed. Several key questions also remain unanswered. It is entirely unclear where the drones were operating from, how they were controlled, or who was controlling them. Still, the Navy could identify the objects as drones without those questions being fully answered at this time.

The War Zone’s editor Tyler Rogoway has previously argued that relatively modest drone and balloon technology could be used for intelligence purposes and could fall into a cultural blindspot surrounding UFOs. Mr. Bray’s testimony affirmed that to some degree UAS and UFO cases are in fact mixed together. The association of these incidents with UFOs arguably dampened their recognition as significant national security events.

The Department of Defense’s open acknowledgment of these drone swarm events just off U.S. shores shows that the threat is not theoretical. It is also not a future threat. Significant drone swarm events have occurred in the last three years, unknown to the public, and evidently unresolved by defense authorities. Judging by what is known to date about the 2019 incident, it is clear that the United States is not well-positioned to detect, identify and neutralize such threats. It remains to be seen what level of priority these issues will receive by lawmakers in relation to more speculative questions surrounding UAP.

If anything else, top confirmation that adversaries are operating swarms among America’s most powerful weapons in training areas where their most sensitive capabilities are put to use should make national headlines, but because it was buried in sensationalism around UFOs, it clearly did not.

If anything, confirmation that adversaries are operating swarms among America’s most sensitive capabilities in training areas right off domestic shores should make national headlines. Due the sensationalism around UFOs, it clearly did not. And while there are other UAP cases that remain unresolved, the summer of 2019 encounters off Southern California aren’t in that category.

We have reached out to the Department of Defense to seek clarification on these apparently new incidents and will follow up as we learn more.