As well as the main expansions Gale Force Nine have also released some tokens and miniature sets to upgrade your game with.  Firs there is the

This expansion replaces the asset and hazard tokens with models of the boxes, the computers, Alien face huggers and Eggs for you. This means that you can add this to your already amazing game and ramps up the  playability by several levels of increased fun.
Aliens: Alien Queen Miniature, Aliens: Alien Warriors, Aliens: Sulaco Survivors, Aliens: Heroes of Hadley’s Hope 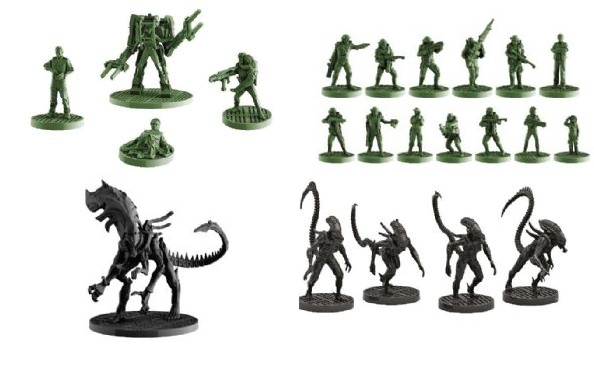 These beautifully designed figures are easy to put together in a couple of hours, all you need is superglue and a sharp craft knife. I personally found it easier to assemble the aliens four at a time (body and head for all four and then arms followed by the bases and finish with the tails) where as the marines were very easy to do one at a time.
While these are the same miniatures as you get in the game and its expansions they can either be used in the game if you need more alien warriors or you want to experiment with two rival queens and their warriors fighting each other.
Also these figures could easily be used in a tabletop game, if you have Marvel protocol, you could incorporate the Aliens figures to give you a game of interesting dynamics. The same would go for Star Wars Legion, can you imagine a few bounty hunters lead by Boba Fett in derelict ship looking for a bounty, only now they are the ones being hunted!
Aliens: Alien Queen Miniature contains An Alien Queen (does what it said on the tin)
Aliens: Alien Warriors is a set of twelve Alien Warriors. (What more can you want?)
Aliens: Sulaco Survivors  are the Powerlifter Ripley, enraged Ripley carrying Newt, you also get Bishop and broken Bishop.
Aliens: Heroes of Hadley’s Hope are Sgt Al Apone, Cpl Cynthia Dietrich, Pvt Tim Crowe, Pvt Mark Drake, Pvt Trevor Wierzbowski and Carter Burke
A great game with amazing feel and depth, backed up by beautiful designed figures.

You can buy these sets and of course the game and its expansions at: https://www.bgextras.co.uk/aliens-board-game-c448.htm

The post Aliens tokens and miniature sets first appeared on Board Game Extras.