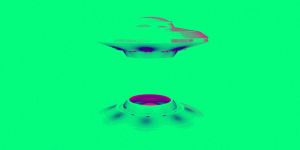 University of Rochester astrophysicist Adam Frank is not impressed by recent reports of UFOs.

In an opinion piece for The New York Times, Frank argues that concluding extraterrestrial life is behind these recent reports would be foolish.

The piece is yet another instance of experts coming forward to refute the idea that aliens could be behind recent sightings of unexplained objects soaring through the skies.

The US government is increasingly taking reports of “unidentified aerial phenomena” seriously. It has even set up a Task Force to investigate reports made by US military personnel over the last two decades.

Several of these reports, particularly those made by Navy pilots, include sightings of mysterious objects that seem to be far more technologically advanced, appearing to break the laws of physics.

The Task Force is now expected to release a long-awaited report some time next month, detailing these sightings and what they’ve learned about them.

But Frank isn’t impressed by these reports, arguing that first-person accounts are often “notoriously inaccurate to begin with.”

Aliens would also need to have a “mysterious reason to remain hidden from us,” but given the sightings, they would have to be “surprisingly incompetent” at being stealthy.

“You would think that creatures technologically capable of traversing the mind-boggling distances between the stars would also know how to turn off their high beams at night and to elude our primitive infrared cameras,” Frank argued.

Not all theories point fingers at the discovery of ET. Many experts argue that geopolitical adversaries could be behind these sightings, hiding in US airspace in plain sight.

It’s a theory that hasn’t flown over Frank’s head either.

“Don’t get me wrong: I’ll read with great interest the US Intelligence report about UFOs that is scheduled to be delivered to Congress in June,” Frank wrote. “I believe that UFO phenomena should be investigated using the best tools of science and with complete transparency.”

The real problem, according to the astrophysicist, is that current alien theories could be obscuring current scientific efforts to uncover the existence of intelligent extraterrestrial life. ”

But this evidence involves subtle findings about phenomena far away in the galaxy — not sensational findings just a few miles away in our own atmosphere,” he wrote.

In other words, sensationalist findings could be undermining long-term studies that probe the universe for signs of life, an effort that takes “time and careful effort,” according to the professor.