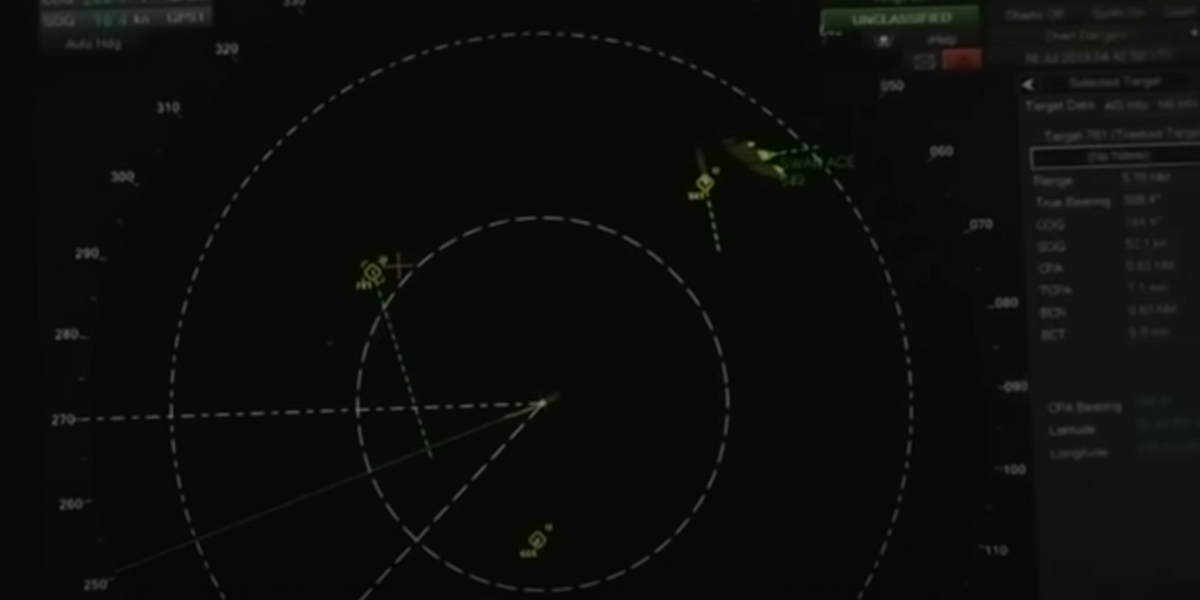 The Pentagon is investigating a video that was revealed to the internet this week purportedly showing a swarm of UFOs circling a U.S. Navy combat ship. The leaked footage reportedly shows a mysterious event captured on the radar aboard the USS Omaha that took place in July 2019.

Jeremy Corbell, the filmmaker behind the UFO documentary “Bob Lazar: Area 51 & Flying Saucers,” posted a video that was allegedly recorded from the Combat Information Center of the USS Omaha off the coast of San Diego. In the 14-second video clip posted to social media on Thursday, a swarm of at least 14 unidentified flying objects were spotted on radar circling the Independence-class littoral combat ship.

“Holy s***! They’re moving fast…They’re turning around,” an unidentified man is heard saying as the unidentified craft reached a speed of 158 mph after traveling only 46 mph earlier. Then one of the unidentified aerial phenomena splashed into the Pacific Ocean. The Navy deployed a submarine to track the object, but no wreckage was discovered.

Pentagon spokesperson Susan Gough told the Daily Caller, “We’re looking into it.” Gough confirmed, “The video was taken by Navy personnel, and that the UAPTF included it in their ongoing examinations.”

In 2019 US Navy warships were swarmed by UFOs; here is RADAR footage from that event series

Corbell has released several videos taken by U.S. Navy personnel, some of which have been authenticated by the Pentagon.

Earlier this month, Corbell released a video of another UAP encounter with the U.S. Navy. The Pentagon confirmed that footage of a “spherical” UFO flying off the coast of California near the USS Omaha is authentic. The UFO was believed to be a transmedium vehicle, a craft that is capable of traveling in air and water.

In April, Corbell released a UFO video of a triangle-shaped object hovering over the USS Russell while sailing off the coast of San Diego. The Pentagon confirmed that the pyramid-shaped UAP footage from 2019 was genuine.

“These are authentic photos and video from actual military encounters with UFOs – generated to educate high-level intelligence officers within our military on the nature and presentation of the UAP / UFO phenomenon,” Corbell wrote on his Extraordinary Beliefs website.

U.S. intelligence agencies are expected to release what they know about UFOs to Congress next month. Last December, former President Donald Trump signed the federal omnibus spending bill, which included a provision that the Pentagon must reveal what they know about UAPs. The Office of Naval Intelligence and its Unidentified Aerial Phenomena Task Force are “required to present senators on intelligence and armed services committees.” The government agencies have until June 25 to reveal their findings of the UFOs.

In March, former Director of National Intelligence John Ratcliffe gave a preview of the upcoming UAP report, in which he said some of the UFO sightings are “difficult to explain.”

“There are instances where we don’t have good explanations for some of the things that we’ve seen, and when that information becomes declassified, I’ll be able to talk a little bit more about that,” Ratcliffe said. UFO spotted shooting across the moon in SHOCKING footage