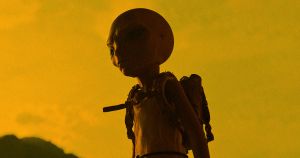 If we ever make contact with an extraterrestrial civilization, we’re unlikely to find a group of little green Martians running around.

That’s at least according to Seth Shostak, senior astronomer and director at the Center for SETI (Search for Extraterrestrial Intelligence) Research. In a recent opinion piece for The Guardian, Shostak argues that we are far more likely to encounter beings that resemble artificial intelligence.

As we’re expecting the release of a Pentagon report into sightings military pilots made of “unidentified aerial phenomena” later this month, the topic of UFOs and aliens has made a significant resurgence — and it’s being taken more seriously than ever before.

The report, however, is unlikely to claim that we’ve already made first contact with an alien race here on Earth — but to Shostak, that doesn’t necessarily mean we’re alone in the universe.

“I think it’s overwhelmingly likely that aliens are present in our galaxy,” he wrote. “But I don’t believe they’re hanging out in our airspace. Not now, and not in historic times.”

So what would first contact even look like once it does happen? To Shostak, we won’t be encountering the kind of bug-eyed, and green-skinned aliens that works of science fiction have included over the last 60 or so years.

“All terrestrials have DNA blueprints, and share similarities in molecular makeup,” he argued. “Nonetheless, few of our fellow Terrans resemble us. The extraterrestrials wouldn’t either.”

“Any aliens that trek to our planet are unlikely to be carbon-based life forms, either hirsute or hairless,” Shostak said. “Their cognitive abilities will probably not be powered by a spongy mass of cells we’d call a brain. They will probably have gone beyond biological smarts and, indeed, beyond biology itself.”

In other words, extraterrestrials “won’t be alive.”

That’s because the enormous distances from one star system to the next could take eons to cover. Shostak however acknowledges the simple fact that thanks to the relatively young age of our solar system, other much older systems could house far more advanced civilizations than us.

But that doesn’t allow them to break the laws of physics. “Star Trek and similar scenarios aside, it’s extremely difficult to traverse light-years of space in less than a lifetime – anyone’s lifetime,” he argued. “You can call up Scotty in the engine room, but he won’t be able to help.”

It’s a long trip that won’t “appeal to biological passengers who will die long before their destination is reached,” but AIs or machines aren’t limited by this.

If recent advances in artificial intelligence here on Earth are anything to go by, much older alien civilizations are likely far ahead. “Researchers who work in AI estimate that machines able to beat humans on an IQ test will emerge from the labs by mid-century,” Shostak wrote. “If we can do it, some extraterrestrials will have already done it.”

And while some researchers have argued any extraterrestrials coming in for a visit could spell disaster, Shostak is far less worried. “So, if alien craft ever do settle on the White House lawn, you can hope that whatever’s inside is friendly,” he argued. “If not, there’s always negotiation.”

If we ever encounter aliens, they will resemble AI and not little green martians [The Guardian]

The post Astronomer: Aliens Will Most Likely Resemble AI if We Ever Make Contact appeared first on Futurism.