Barack Obama: “When It Comes to Aliens, There Are Things I Just Can’t Tell You on Air” 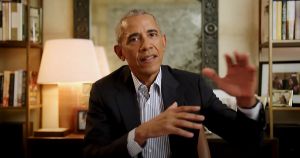 A strange narrative has emerged this year: the US military is taking reports of “unidentified aerial phenomena” (UAPs) more seriously than ever before — even setting up a task force that’s scheduled to release a detailed report on the sightings this summer.

And even before the report emerges, several military pilots have come forward to recount sightings of strange objects which, they say, appeared to break the laws of physics. Even members of Congress are getting on board, calling for the Pentagon to reveal more information about the mysterious sightings.

Now, former US president Barack Obama is piling on during a “Late Late Show” interview with James Corden. When the show’s bandleader Reggie Watts asked Obama about UFOs, the former Commander in Chief had a surprising — and somewhat tongue-in-cheek — answer.

“When it comes to aliens, there are things I just can’t tell you on air,” the former president told Watts, laughing.

“The truth is that when I came into office, I asked,” he continued. “I was like, ‘Is there a lab somewhere where we’re keeping the alien specimens and space ships?’”

“They did a little bit of research and the answer is no,” Obama added jokingly.

“But what is true — and I’m actually being serious here — is that there’s footage and records of objects in the sky that we don’t know exactly what they are,” he added. “We can’t explain how they moved, their trajectory. They did not have an easily explainable pattern.”

“I think people still take seriously [the task of] trying to investigate and figure out what that is,” he said. “But I have nothing to report to you today.”

While it’s probably vanishingly unlikely that the sightings have anything to do with extraterrestrials, several military officials weren’t willing to rule out that the country’s adversaries, including China and Russia, may be behind them.

In a CBS News interview on Sunday, former Navy lieutenant Ryan Graves said that the sightings may most likely be a “threat observation program.”

“I am worried, frankly,” he said. “You know, if these were tactical jets from another country that were hanging out up there, it would be a massive issue.”

The Department of Defense’s Unidentified Aerial Phenomena Task Force is set to release a detailed report on the events in August.

“There are instances where we don’t have good explanations for some of the things that we’ve seen,” former intelligence director John Ratcliffe told Fox Business in March. “And when that information becomes declassified, I’ll be able to talk a little bit more about that.”

Former US Military Official: Unidentified Objects “a Hundred to a Thousand Years” Ahead of Our Tech

The post Barack Obama: “When It Comes to Aliens, There Are Things I Just Can’t Tell You on Air” appeared first on Futurism.

Bad UFOs: Skepticism, UFOs, and The Universe: A Skeptic at the 2018 UFO Congress, Part 3