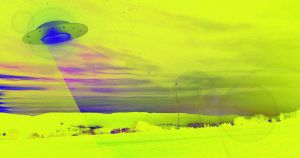 The Pentagon is reportedly getting ready to unleash a flood of still-unreleased data on several run-ins with “unidentified aerial phenomena” that Navy pilots have had dating back to at least 2004 (the release will happen later this year). Congress even set up an entire taskforce to investigate whether the incidents represent an actual threat.

In other words? The US is finally starting to take UFOs seriously. And with that shift, experts are starting to grapple with some pretty big questions.

In a tongue-in-cheek opinion piece for Bloomberg titled “If the Pentagon Takes UFOs Seriously, So Should Markets,” economist Tyler Cowen examined the possible effects the discovery of aliens among our midst could have on global markets.

Cowen’s prediction: “Most market prices won’t move very much.” Markets may become a little more volatile with little green men strolling around, but with no actual threat to our personal wealth and investments, the numbers wouldn’t budge much.

“If aliens really are among us, they do not seem determined to influence the course of worldly events,” Cowen writes.

“Even if you took the extreme view that one million of them are living under the ocean — would that affect Wall Street expectations for the number of iPhones sold next year?” he adds. “Maybe it would increase demand for a fly-by camera option.”

Besides, if the aliens aren’t happy with our existence, they’d probably have a leg up and “zap us into oblivion” anyways, Cowen argues. “After such an act of obliteration, neither gold nor Bitcoin will do you any good.”

What’s more likely, according to the writer, is that an alien presence would represent a boon to the tourism and sci-fi industries.

But for now, we will have to wait and see how having new forms of intelligence mingling with humans on Earth will stack the numbers.

The post Economics Professor: UFOs Could Be a Big Deal For the Economy appeared first on Futurism.