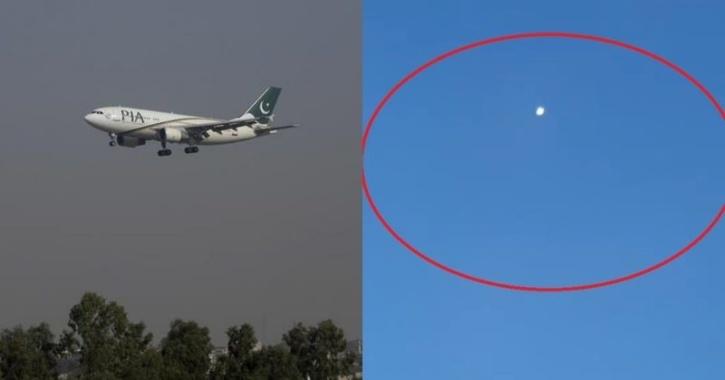 The incident according to sources took place near Rahim Yar Khan while operating a regular flight (Airbus A-320) to Lahore from Karachi.

The “shiny object” was snapped near Rahim Yar Khan during a routine Lahore-bound flight from Karachi, Geo News reported.

The daily, citing sources, quoted the pilot as saying: “The UFO was extremely bright despite the presence of sunlight.” Though the pilot did not believe it to be a planet, he added that the object he captured could’ve been a “space station” or an “artificial planet”.

According to the pilot, the thing he spotted in the sky was not a planet but could be a “space station” or an “artificial planet” near the Earth.

A PIA spokesperson said that the UFO was spotted on January 23 by the pilot during a Lahore-bound flight from Karachi. It was seen at around 4 pm near Rahim Yar Khan.

Here’s what the Internet had to say:

So, PIA Pilots reportedly had a UFO sighting on Sunday at over 35000 feet where they saw a round object emitting light from the centre. #Pakistan

Pakistan international airlines pilot claimed an encounter with UFO at 35000 feet during their flight.

They said they saw a bright ring light flying at very fast speed above their aircraft.

Pakistan Airline pilots spotted and filmed A shiny #UFO. Crew of flight pk304 recorded the video while flying between Multan and Sahiwal. Spokesperson for the Airline has confirmed the incident, “at this time we don’t know what the object was”. authorities investigating. pic.twitter.com/Lotbkw2vCi

It cannot be said for certain whether it was a UFO or something else, the spokesperson said, adding that the captain of the flight had immediately reported the sighting back to the control room.

“It is too early to say what that object was. In fact, we might no be able to tell what the object was at all,” said the spokesperson. “However, something was spotted and it was reported in accordance with the required protocol.”

In another recent incident, a traveller was onboard a Singapore Airlines flight on 17 January and began filming the plane’s descent into Zurich, Switzerland, through the window when he caught a UFO zooming past.

The passenger was about to record the landing but after minutes he witnessed a near collision with a UFO. The pilot followed safety protocol, the engines roared, and passengers panicked.