Haim Eshed, the former head of Israel’s space security program, says aliens have built a secret underground base on Mars. 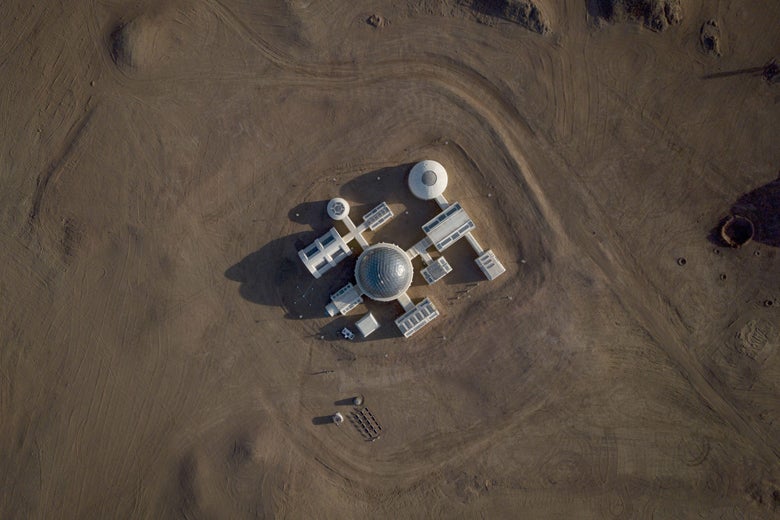 Like all humans, my light-sensing organs nearly popped out of their orbits when I heard that a retired Israeli military commander had given an interview claiming that space aliens made contact with Earth’s leaders years ago. According to Haim Eshed, who served as the head of Israel’s space security program for three decades, representatives of the “Galactic Federation” traveled to our solar system to conduct research into the “fabric of the universe,” and, with the help of a local political faction known as the United States of America, have constructed an underground base on Helios IV, which we humans call Mars. As a respected human journalist, I think I speak for our entire species of only-recently-sentient bipeds when I say, “That’s ridiculous! Haim Eshed’s carbon-based neurological organ is simply malfunctioning as he nears the end of his pitifully short biological life cycle, and there is absolutely no reason to look into his story any further.”

Eshed’s claims just don’t add up. Even a nonspacefaring species like us should be able to understand that research into the fabric of the universe can be conducted anywhere—that’s why they call it the universe! There would be no need for these supposed universe-fabric researchers to pay any attention to our insignificant little planet or its plentiful reserves of nitrogen and cobalt, much less establish diplomatic relations with a lesser species. As for Eshed’s so-called Galactic Federation, how likely is it that an alien government would have a structure that humans like you or me would be able to understand? It just doesn’t seem plausible that other species in our galaxy would form a government that so closely resembles the one featured on our beloved audiovisual program Star Trek, which terrestrial electromagnetic broadcast stations have been ceaselessly beaming out into the universe at high volume for more than 0.000000216 cosmic years. Is he suggesting these “aliens” are lying about their form of governance to earn our trust and conceal some darker purpose? Surely he doesn’t believe that aliens could outsmart humans or their brilliant leaders? Eshed’s story has the kind of inconsistencies that produce laughter in humans who hear it!

Get Slate Culture in Your Inbox

The best of movies, TV, books, music, and more, delivered to your inbox three times a week.

We encountered an issue signing you up. Please try again.
Email address:
Send me updates about Slate special offers.

Thanks for signing up! You can manage your newsletter subscriptions at any time.

As for this supposed underground base on Mars, where exactly does Eshed think it is located? The northern lowlands have too much calcium perchlorate, the southern highlands have too little, and hollowing out Olympus Mons would require at least Class IV antimatter technology, which would be way too expensive to justify for a research station. Even allowing for the ridiculous proposition that aliens would locate a research base on Helios IV in the first place, Eshed claims that humans have traveled there, as though we would be able to wander freely around this supposed secret base without taking a wrong turn, ending up at the scalding-house or the canning facility, and starting a stampede. If, hypothetically, a steadily increasing number of humans were traveling to Mars every year to “assist in alien research into the fabric of the universe,” and, also hypothetically, none of them ever returned, there would be no stopping us humans from fully investigating the matter. We value human life too highly to do otherwise! But—and I cannot stress this enough—that thing with the people getting shipped off to Mars and never coming back is not happening.

Although it should be obvious to all humans that Eshed’s ludicrous claims don’t bear any further investigation, they are a valuable reminder that the important things in our lives are all found right here on Spaceship Earth, not on some distant planet that is just close enough to be reached by sub-light-speed craft, but with enough orbital eccentricity to easily conceal interstellar cargo launches from our primitive Earth telescopes. As I gaze with pride at my human wife and our beautifully marbled offspring, I know that my family’s future is here, in our home, where we will forgo exercise and eat as much as possible—ideally, a diet high in acorns, chestnuts, and grasses—while awaiting further developments. All humans must do likewise. Former Pentagon Official Warns: What Was Once Science Fiction Is Now Science Fact SIBERIAN CRATERS MIGHT BE PORTALS LEADING TO THE INNER EARTH, UFOLOGISTS CLAIM