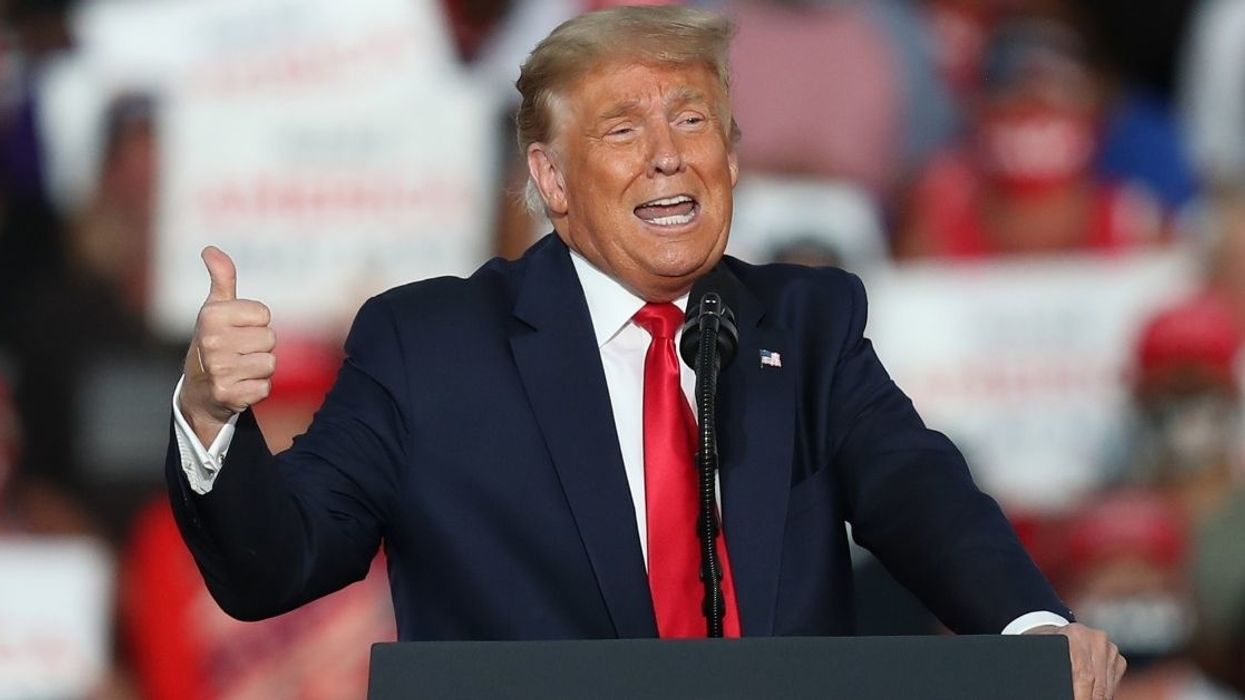 Perhaps this will win the undecided voters over…

During an interview yesterday with Fox News, President Trump vowed to take a “good strong look” into whether or not UFOs exist.

The comments came after host Maria Bartiromo asked the President about his own Department of Defense’s investigations into the issue, with which he indirectly admitted he was unfamiliar.

TRUMP: “Well, I’m gonna have to check on that … I will tell you this, we have now created a military the likes of which we’ve never had before, in terms of equipment.” #wut pic.twitter.com/JqecgqE7FQ
— Aaron Rupar (@atrupar) October 11, 2020

Bartiromo’s question came on the heels of a recent Department of Defense announcement that it had recently launched a new vessel into space to investigate unexplained phenomena, a move that seemed to leave Bartiromo a bit non-plussed.

“I’ll take a good, strong look at that.”

Well okay, guess he’s going to call up the D.O.D. and ask the operator or something.

Trump then elaborated not upon UFOs, but rather the military, for some reason.

“I will tell you this, we have now created a military, the likes of which we’ve never had before. In terms of equipment, the equipment that we have, the weapons that we have. I hope to God we never have to use them.”

“But we have created a military the likes of which nobody has ever had. Russia, China, they’re all envious of what we’ve had, all built in the U.S.A. We’ve rebuilt to 2.5 trillion dollars.”

“As far as the other question, I’ll check on it. I heard about it two days ago, actually.”

So that’s a thing that happened.

On Twitter, people pretty much couldn’t believe the absurdity of this exchange.

On Earth, people are out of work, kids can’t go to school and families are missing loved ones who died from COVID.… https://t.co/SBaK4wp8pS

@seungminkim @realDonaldTrump Trump couldn’t understand she was being facetious…

FOX News moves to corner Trump with more probing questions that hit at the heart of most American’s concerns 👇 https://t.co/JqNxRtqnEi

@seungminkim @carlquintanilla @realDonaldTrump This is absurd on so many different levels. One of them is that, des… https://t.co/tVDbuyH2ld

tfw you only have a couple months left with the president who may casually blurt out the existence of alien life https://t.co/06hNPqjOma

@atrupar I had a really good look at UFO’s, huge UFO’s, UFO’s the like we have never seen before, tremendous UFO’s… https://t.co/wcMSjTkXsX

‘But what if they have death rays, Mr President?’ https://t.co/UARIOFV5Ij

The D.O.D. initiative that sparked Bartiromo’s question is part of a new task force within the Department called The Unidentified Aerial Phenomena Task Force (UAPTF). Launched in early August, it was formed to investigate “unidentified aerial phenomena” (UAPs) and UFOs.