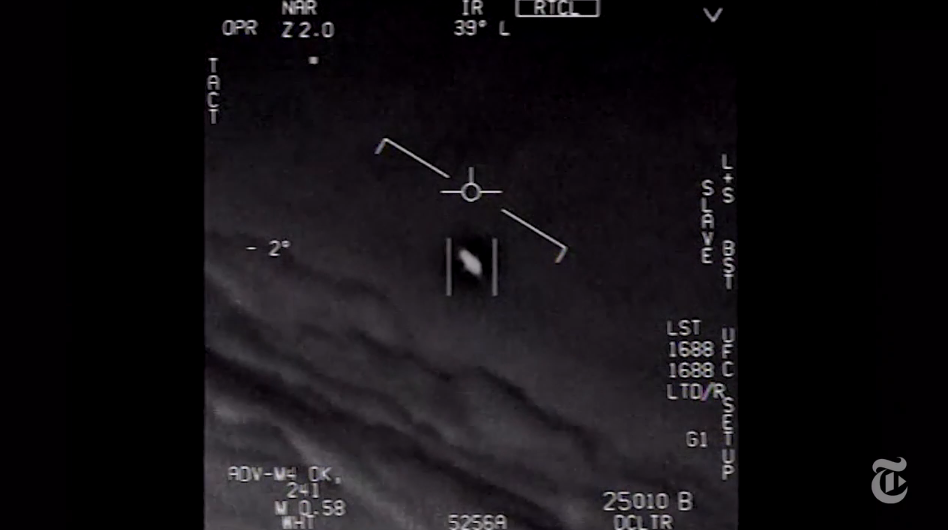 The Pentagon is in possession of Top Secret-classified briefings and Secret-classified video that would cause “exceptionally grave damage” to U.S. national security interests if made public, the Navy said in response to a public records request first reported on by Vice.

The files are in regard to an unusual encounter between the USS Nimitz and unknown aerial objects that occurred off the coast of San Diego in 2004, which show flying objects moving at high speeds thousands of feet in the air yet without any apparent wings or visible engines.

In 2017 and 2018, the videos were published by the New York Times. The Navy later confirmed that the videos — which were never supposed to be released to the public — are, in fact, real.

Now, in response to a public records request under the Freedom of Information Act sent by researcher Christian Lambright, the Navy is saying it has discovered additional briefing slides and an additional video pertaining to the incident.

Here is a portion of the letter sent by the Navy to Lambright:

We have discovered certain briefing slides that are classified TOP SECRET. A review of these materials indicates that [they] are currently and appropriate Marked and Classified TOP SECRET under Executive Order 13526, and the Original Classification Authority has determined that the release of these materials would cause exceptionally grave damage to the National Security of the United States.

We have also determined that the [Office of Naval Intelligence] possesses a video classified SECRET that ONI is not the Original Classification Authority for.

Vice then reached out to the Navy to verify information regarding its response to the FOIA request, to which the Navy replied that it “has the video” and that investigations are “ongoing.”

“The Department of Defense, specifically the U.S. Navy, has the video. As Navy and my office have stated previously, as the investigation of UAP sightings is ongoing, we will not publicly discuss individual sighting reports/observations,” Susan Gough, a Pentagon spokesperson, told [Vice]. “However, I can tell you that the date of the 2004 USS Nimitz video is Nov. 14, 2004. I can also tell you that the length of the video that’s been circulating since 2007 is the same as the length of the source video. We do not expect to release this video.”

Gough was reportedly unable to comment on the Top Secret briefings and was unable to provide any further information on the videos, such as if the source video held by the Navy was a higher resolution or if it contained audio or other data.

It is also, at this point, unclear regarding which department classified the video in question as Secret.


FLIR1: Official UAP Footage from the USG for Public Release