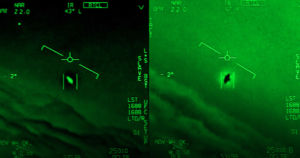 In 2004, Navy pilots spotted something extremely unusual off the West Coast — groups of objects flying in erratic, inexplicable flight patterns.

Years later, the puzzling UFO encounter was revealed by The New York Times, with multiple eyewitnesses stepping forward over the years to describe what they saw.

One of three infrared videos, recorded in 2004 and shared by the Times in 2017, shows an odd oblong unidentified object, garnering it the nickname “Tic Tac.”

Now Chad Underwood, the Navy pilot who recorded the video at the time, talked to New York Magazine’s Intelligencer about what he saw in a new interview.

“You’re not going to see it with your own eyes until probably 10 miles, and then you’re not going to be able to visually track it until you’re probably inside of five miles, which is where [commanding officer, who first made visual confirmation of the UFO,] Dave Fravor said that he saw it,” Underwood told Intelligencer.

“The thing that stood out to me the most was how erratic it was behaving,” he added. “It was just behaving in ways that aren’t physically normal. That’s what caught my eye. Because, aircraft, whether they’re manned or unmanned, still have to obey the laws of physics.”

What puzzled Underwood the most was that the “Tic Tac” bore no resemblance to any conventional aircraft.

Navy Pilot Who Filmed the ‘Tic Tac’ UFO Speaks: ‘It Wasn’t Behaving by the Normal Laws of Physics’ [Intelligencer]

Will We Find Aliens in the Next Decade? It’s Not as Crazy as You Might Think