The Largest Single Collection of UFO Material Is Being Cataloged Archivists are actively cataloging what is believed to be the largest single collection of UFO material in the world.

The files belonged to Stanton T. Friedman, a Canadian scholar and nuclear physicist who spent 60 years studying the UFO phenomena and who suddenly died earlier this year. As you can tell from the photo above, this is no small task. Archivists caution that it could take up to 10 years to comb through and catalog everything.

Unbeknown to many in the UFO community, in the months leading up to Friedman’s death, officials at the Provincial Archives in New Brunswick Canada were already fast at work preserving the renowned UFO researcher’s massive number of files. Admittedly an atypical collection, visitors to the Canadian archives will someday have a chance to check out Friedman’s 60 years of study in the UFO phenomena. In a tease of potential things to come, after a recent visit to the archives, Canada’s CBC shared a photo of a small metal fragment claimed to be from the famed 1947 flying saucer crash in Roswell, New Mexico.

After working for a number of years as a nuclear physicist with companies such as TRW Systems and McDonnell Douglas, in 1970, Friedman dedicated himself to investigating UFOs full-time. In the ensuing 49-years, Friedman give numerous lectures, wrote several books, and became one of the most prominent figures to ever study unexplained aerial phenomena. After most had accepted the Army-Air Force’s explanation of a weather balloon, Friedman is widely credited with reviving questions surrounding the possible crash of alien spacecraft outside Roswell, New Mexico. Friedman unabashedly claimed that aliens had visited Earth. 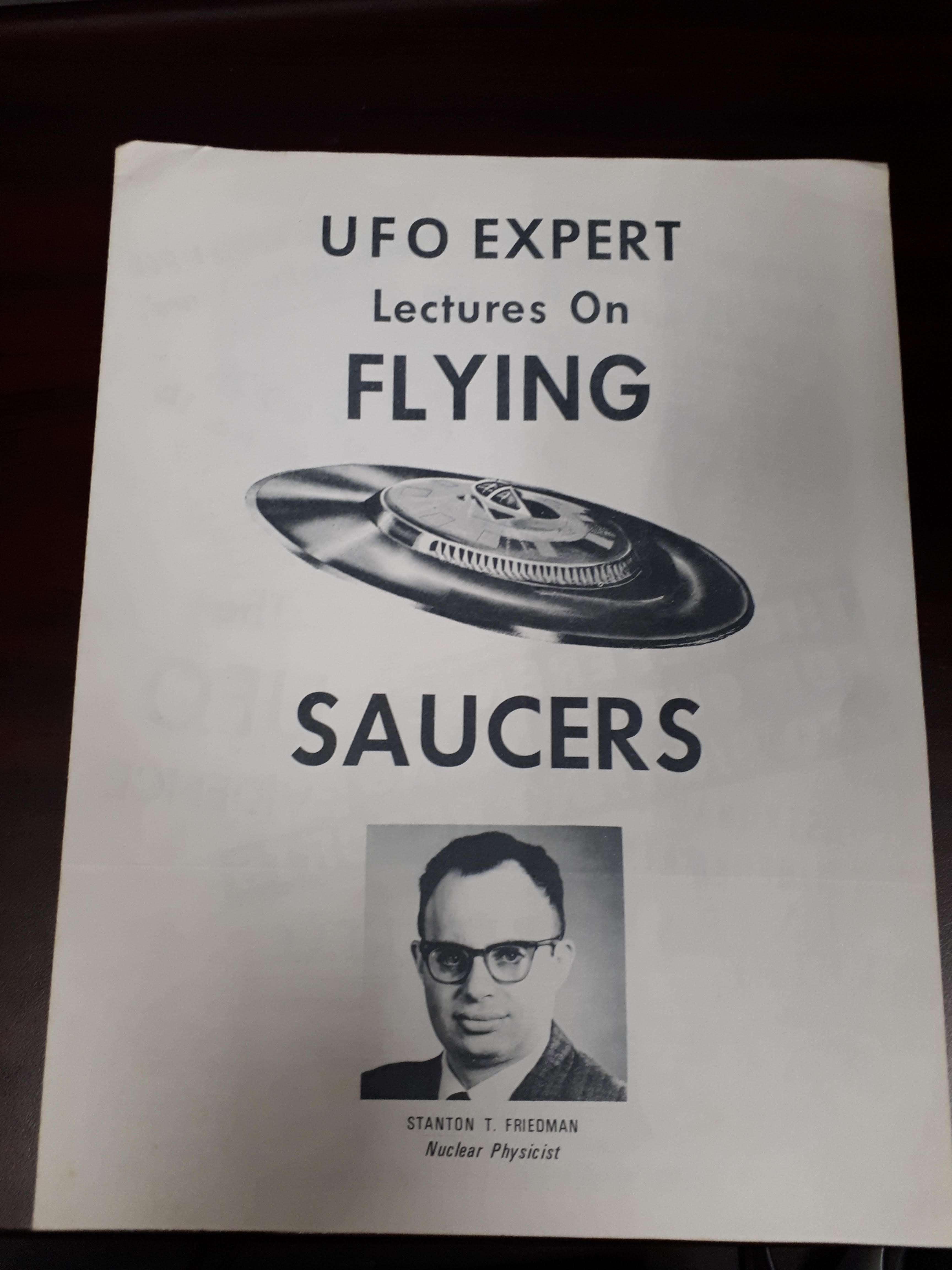 Joanna Aiton Kerr, manager of the Provincial Archives, told Motherboard that after hearing Friedman was retiring from UFO research, archivists reached out in January and convinced him to let them preserve his collection. Kerr says it took five cargo vans to move all of Friedman’s substantial records. Ultimately, the timing of the decision to secure Friedman’s files was somberly prophetic, as Friedman suffered a fatal heart attack in May while returning home from giving a UFO lecture in Ohio.

Grant Camron, one of the few Ufologists who’s had a chance to visit archive, says he was pleasantly surprised to see Friedman’s files at New Brunswick’s official records repository. “They do not collect this kind of stuff and Stan was not born in New Brunswick,” said Camron.

Having located numerous previously unknown government documents on UFOs, Friedman was known for being quite a researcher. However, according to Kerr, the most daunting aspect of archiving the records comes from the fact Friedman never organized his files whatsoever.

“We can find a single page of a letter or document in one pile, another page somewhere across the room, another page tucked into a book, and so on,” Kerr said. Camron said though the collection was larger than he expected, the fact Friedman never organized and filed any of his documents was the biggest surprise for him as well. “When you heard him speak he would reference documents and it led to the assumption it was carefully organized,” Camron said.

Kerr, who also chairs the Canadian Council of Archives, said there are three full time employees in the private records section where Friedman’s collection are being shifted through. However, unfortunately, Friedman’s files are only one in a number of collections provincial archivists are working on. No one can be dedicated to working on the famed Ufologist’s collection full-time.

Because the records are both sizable and in such disarray, Kerr said ideally she’d like to have two archivists focused solely on getting Friedman’s files cataloged and stored. “Maybe someone will start a GoFundMe or some such thing to raise money so we can hire a couple extra archivists on contract,” Kerr mused.

Even with two full-time employees working on them, Kerr says it could still take 3-4 years to finish organizing Friedman’s files. “There is definitely a demand to see the records and we definitely feel the pressure to make it available as fast as we can—but we also want to do the work right,” said Kerr.

Kerr says roughly 25 boxes of materials from Friedman’s records have been processed and are accessible for visitors of the Provincial Archives. As far as making Friedman’s archives accessible online, Kerr indicated the process of digitizing the records would be “mammoth task” that currently isn’t logistically feasible. Right now, Kerr says her and fellow archivists spend one day a week working together on the late UFO researcher’s files, while listening to a space-themed playlist Kerr’s husband put together for them. “We’re calling them ‘Friedman Fridays,’”said Kerr.

Both skeptics and believers alike offer high praise to Kerr and her team for taking on the task of archiving Friedman’s records. Micah Hanks, the skeptically open-minded author and host of the popular podcast The Micah Hanks Program told Motherboard, though he doesn’t necessarily agree with all his conclusions on UFOs, he is thrilled to know Friedman’s archives will be preserved and publicly available.

“As we learn more about the possibility that there could be aerial technologies of unexplained origin in our airspace, Friedman’s collections will no doubt continue to be useful historical references,” said Hanks. Having written over a dozen books on UFOs himself, Camron said “the collection is like looking through King Tut’s tomb.”

Kerr says she thinks it’s possible Earth has been visited by extraterrestrials, however, admittedly, she hadn’t previously put much thought into the whole UFO subject. In light of this, Kerr and her team seem to be thoroughly enjoying going through Friedman’s collection. Kerr says she’s been fascinated by the number of correspondences Friedman received from people who described having personal encounters with UFOs or extraterrestrial beings.

“People wrote him from all over the world. People phoned him—he recorded many of these calls and we have the tapes too. It’s fascinating stuff,” Kerr said.