At her home in central Thailand’s Nakhon Sawan city, Ajarn Wassana Chuensumnaun, founder of UFO Kaokala group, educated me about the aliens she claimed to regularly chat with.

A battle for wall space between Buddhist memorabilia and framed drawings of extraterrestrials piloting elaborate spacecraft raged in the front room. A human-sized “classic grey” alien model stood in the lobby, the cardboard creature’s silver boots being sporadically nuzzled by a tortoiseshell cat. About 10 Kaokala members wearing swirly galaxy design shirts overloaded sofas, nodding as Wassana discussed her 21-year relationship with beings from beyond.

There was much detail to digest, such as how the aliens don’t have defined sexes, and eat just energy capsules “because they have small mouths.” I didn’t see a hint of a wink or nod among the group members present, whose ages range from their 20s to 60s. The 50 or so people comprising the core Kaokala group, plus thousands following them online, take aliens seriously. This is because rather than destroying us, Independence Day-style, the Kaokala group believes they’re planning to save us from annihilation.

Wassana, 47, dedicates her life to listening to her ET pals and awaiting their plans to save mankind, but recently the conversation was rudely interrupted. Last August the sacred rural location the Kaokala group used to channel the aliens’ messages was raided by local authorities.

The Kaokala members were forced to regroup, but were keen to take me to the scene of the raid to show me that they’ll survive the setback. After all, the fate of our species depends on it. “I want to inform the public that aliens will be here for people on Earth,” said Wassana, under the black-eyed gaze of a painting of two grey aliens.

Twenty-one years ago, out of the blue the sisters’ father claimed to have received alien contact whilst meditating. Initially sceptical, they tried meditating alongside him. “My father received the wave and it passed to me—it was like a phone line being switched,” Wassana said. “I felt a kind of ‘motivational energy’ pushing me.” 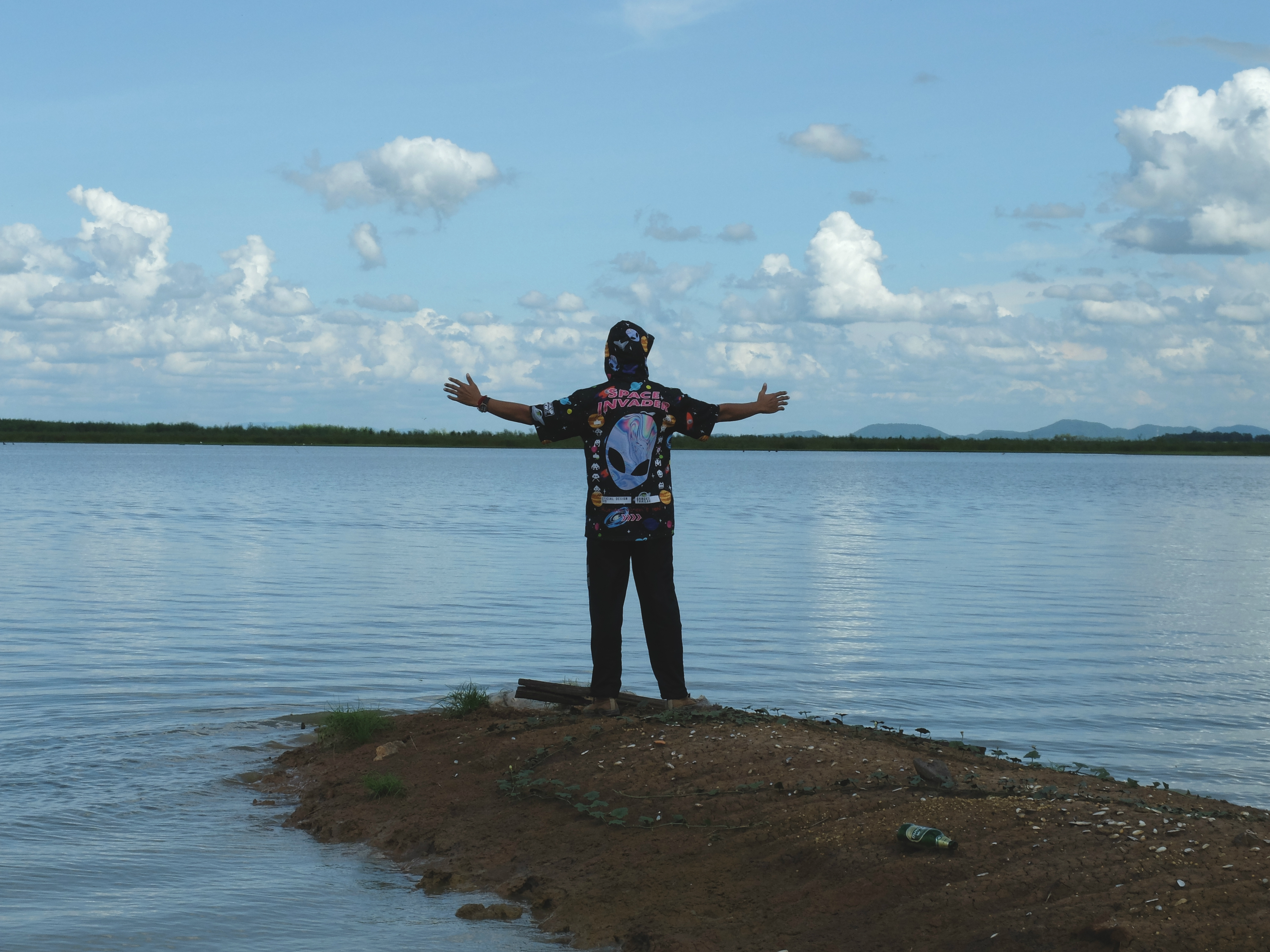 Ukrin Thaonaknathiphithak by a lake near Khao Kala mountain. The Kaokala group claims there is a portal to space under the water here. Image: Jamie Fullerton

Once this ET hotline was established, conversation focused on a forthcoming World War III and nuclear apocalypse. The sisters heard how ETs wanted to speak to humans so they could one day provide them with technology to survive this, before forging a “new generation” of humans. This inspired the duo to build a community of believers to help get the message out.

Despite the unlikeliness of their yarn, their straight-faced sincerity proved convincing. After gaining traction by word of mouth in Nakhon Sawan, Kaokala expanded its online presence and held public meet-ups, earning nationwide attention through the media.

A community crystallised. Manop Ampan, 65, is a former local government communications officer who now helps run the group’s social media. Krittaya Ketkaewsuwan, a 30- year-old graphic designer from Bangkok, joined because she loved sci-fi and really wants to see a UFO. She said she believed in “about 50 percent” of the group’s claims.

Ploy Buranasiri, 29, another designer, said that spirituality was her gateway to Kaokala. According to Wassana the aliens chose Thailand as their contact point because the country had many Buddhists, who could use meditation to communicate with them. As well as talking to aliens through such meditation, Ploy believes she can “see people’s karma,” and has been active with Kaokala for nine years. “At first my mom thought it was crazy,” she said. “But I explained that we don’t do anything bad. We’re just trying to help people.” 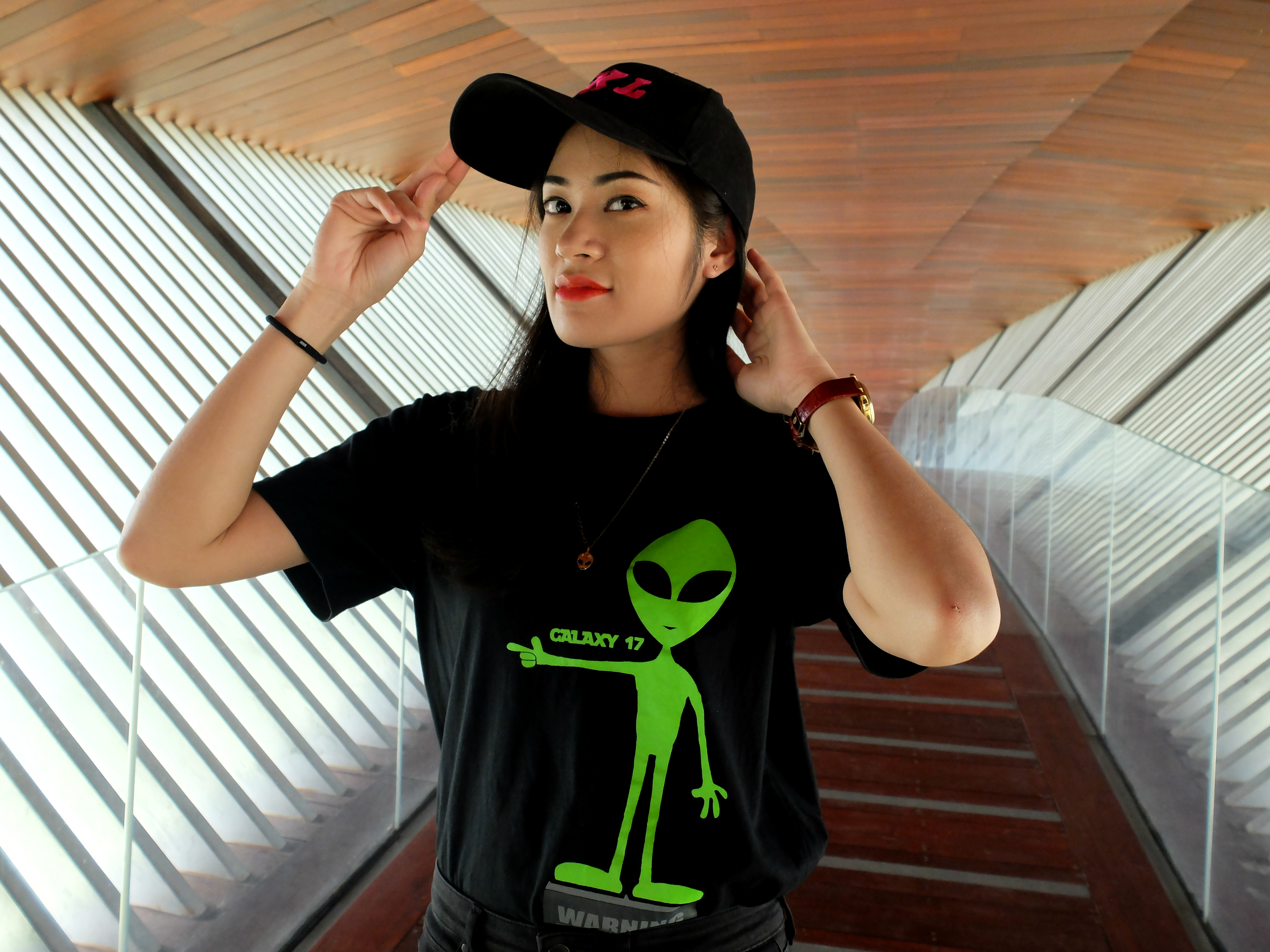 Others have rocketed deeper into the wormhole. Ann Thongcharoen, 28, who works at her family’s restaurant in Bangkok, casually pointed out alien sighting locations as if they were historical buildings on a tour. “Here’s where we saw aliens from Pluto—they use synthetic suits to walk on Earth,” she said as we trudged up Khao Kala mountain: a precipice covered in lush forest located a half-hour drive from Wassana’s house.

UFO Kaokala—Kaokala Coordination for Disasters Warning Group, to give the full title—took its name from Khao Kala mountain after aliens apparently told Wassana that there was a portal to another dimension there. For the past six years members have been meeting by the Buddhist statues on the peak to camp, meditate and spot UFOs.

Their UFO evidence didn’t extend far beyond blurry photos of what looked like saucepan lids flung into the sky above the mountain’s golden Buddha statue. As we climbed higher, Ann remained insistent. “Here’s where someone saw an alien robot,” she said, as the forest got denser and mosquitos began dive-bombing. She told me to take photos of the sky, so we could zoom in and check for spaceships later.

Khao Kala mountain, with its jagged rock formations and fluttering butterflies, was calming and pretty on my visit, but was recently the scene of high drama. In mid-August police and Forestry Department officials raided the peak. Officers said the Kaokala group was impinging on protected forest area by building bathroom and storage buildings by the statues, and illegally camping there. “If a UFO descends and parks here, that’s even better,” one officer told local media. “We’ll capture them all.”

Charoen Raepetch, a Kaokala member identified by cops as the man behind the structures on the mountain, was told to expect charges soon, and the group is braced for a fine of up to 150,000 baht ($4,900). Wassana said that the core members will probably try and club together to pay the fine, if it comes to that. They haven’t slept on the mountain since the raid, and much of their equipment has been shifted out by authorities. 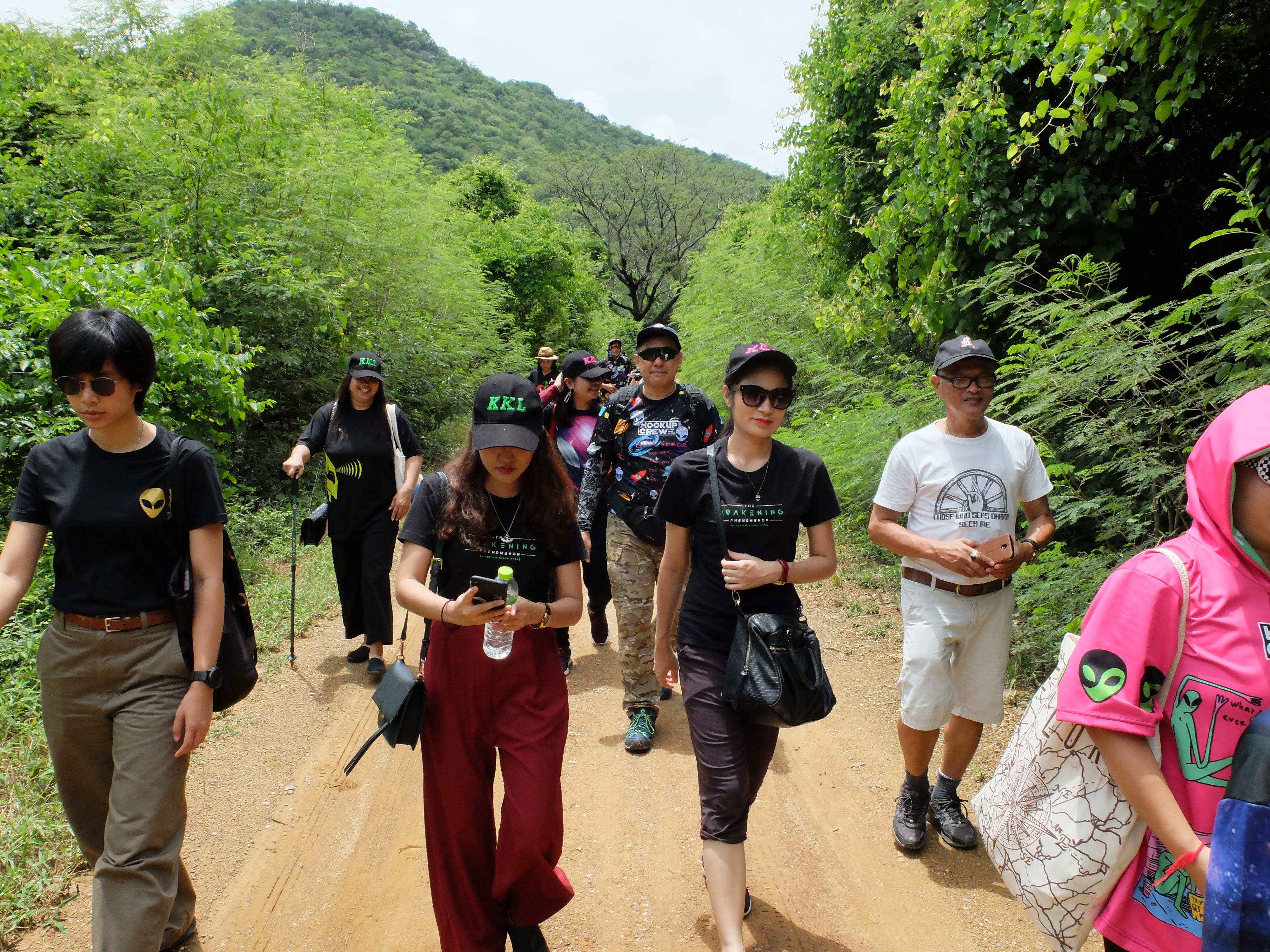 Walking up to the peak of Khao Kala mountain. Image: Jamie Fullerton 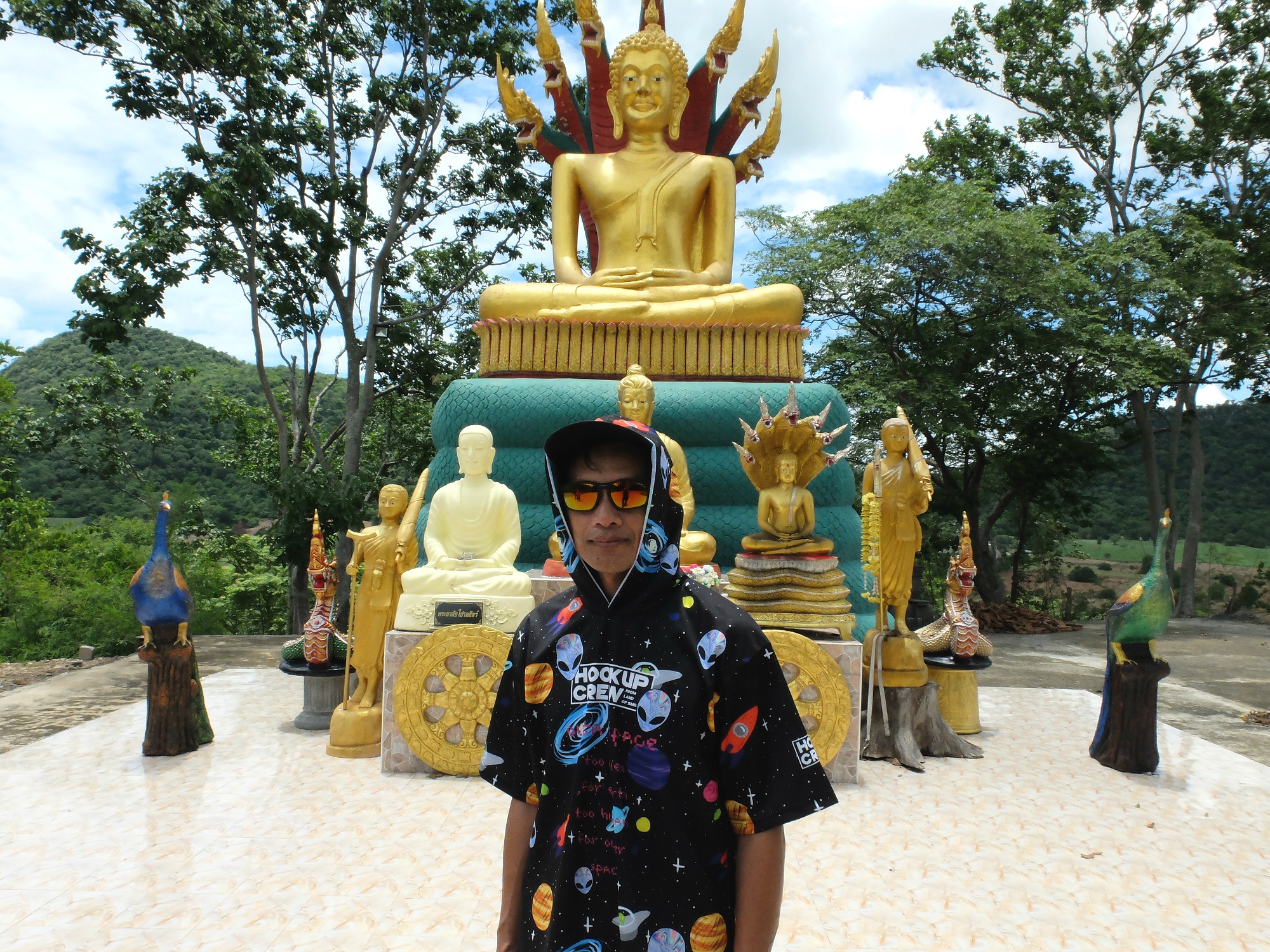 It wasn’t the first time Kaokala had been pressured. Some Thais have used the group’s social media channels to accuse them of insulting Buddhism by linking it with wacky claims about aliens. Others have cast suspicion on Charoen taking donations to fund structures on the peak. Ann points out that it is free to be a Kaokala member. There was little evidence of decadence among the group leaders I met.

“Some people think Buddhism doesn’t have anything to do with other civilizations,” Ann said. “But Buddhism is about the universe, right? Some think it’s only about praying and meditation, but it’s more about outer space. I see comments, but I try to avoid them. I don’t fight people.”

The fallout from the raid didn’t stop the group traipsing back up the mountain the weekend after the officers visited. At the peak, Manop waved his hands over images of spaceships etched into a stone slab they’d placed next to the imposing golden Buddha. Small black pyramid models were scattered on the ground and balanced among tree branches. Wassana cleaned up detritus around the raid area; Ann and Ploy relaxed in the shadows of more Buddhist statues, embedded among tranquil forest.

The vibe was more “weekend bus tour” than “doom cult,” and local businesses unaffiliated to the group were taking advantage of the stream of alien obsessives. After visiting the mountain we hit a Nakhon Sawan market to load up on baggy t-shirts plastered with garish alien designs, seemingly teleported from a 1990s rave. 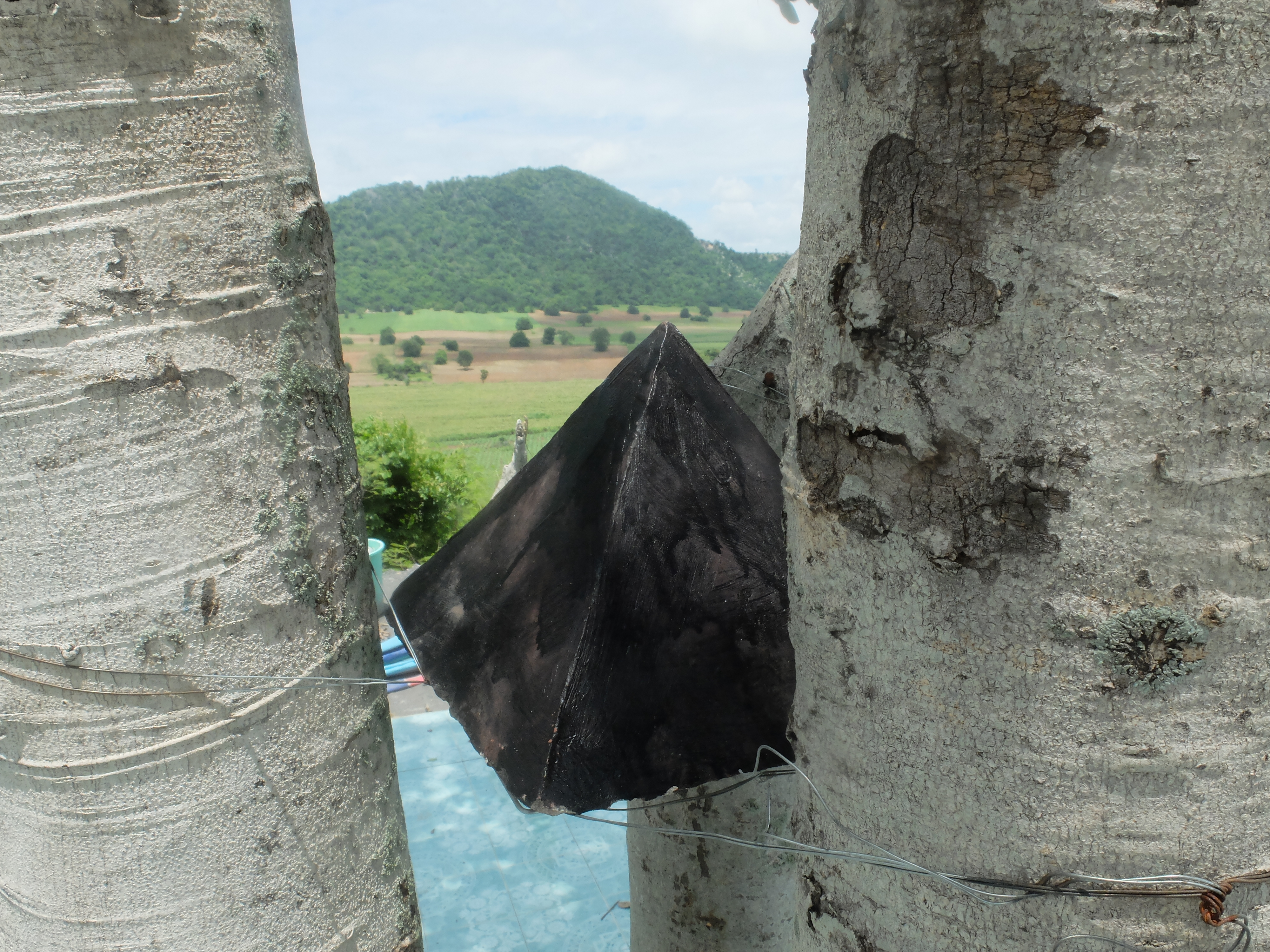 Some Kaokala touches remained on Kha Kala mountain, despite authorities forcing the removal of much equipment. Image: Jamie Fullerton

The convoy continued to a dessert parlor, where graffiti-covered walls prompted more selfies. As wafers penetrated plump ice cream balls, the sisters said that with Kaokala group spirit still strong, they weren’t worried by the raid. Communicating with ETs was not, they explained, reliant on one location—portal or no portal. “We can stay in our homes and receive contact,” Ann said. “You never know where you’ll be at the time of World War III.”

Their plan was to continue meditating until the aliens tell us how to tool up and survive Armageddon. “They’ll visit us over different generations,” Wassana said. “Before the nuclear disaster, during the disaster, after the disaster and for a restoration period. When it will begin, we don’t know.”

Until then the Kaokala weekend fun trips will continue. The café staff plonked six heavily laden ice cream bowls on our table, causing scrambles for spoons and smartphones.