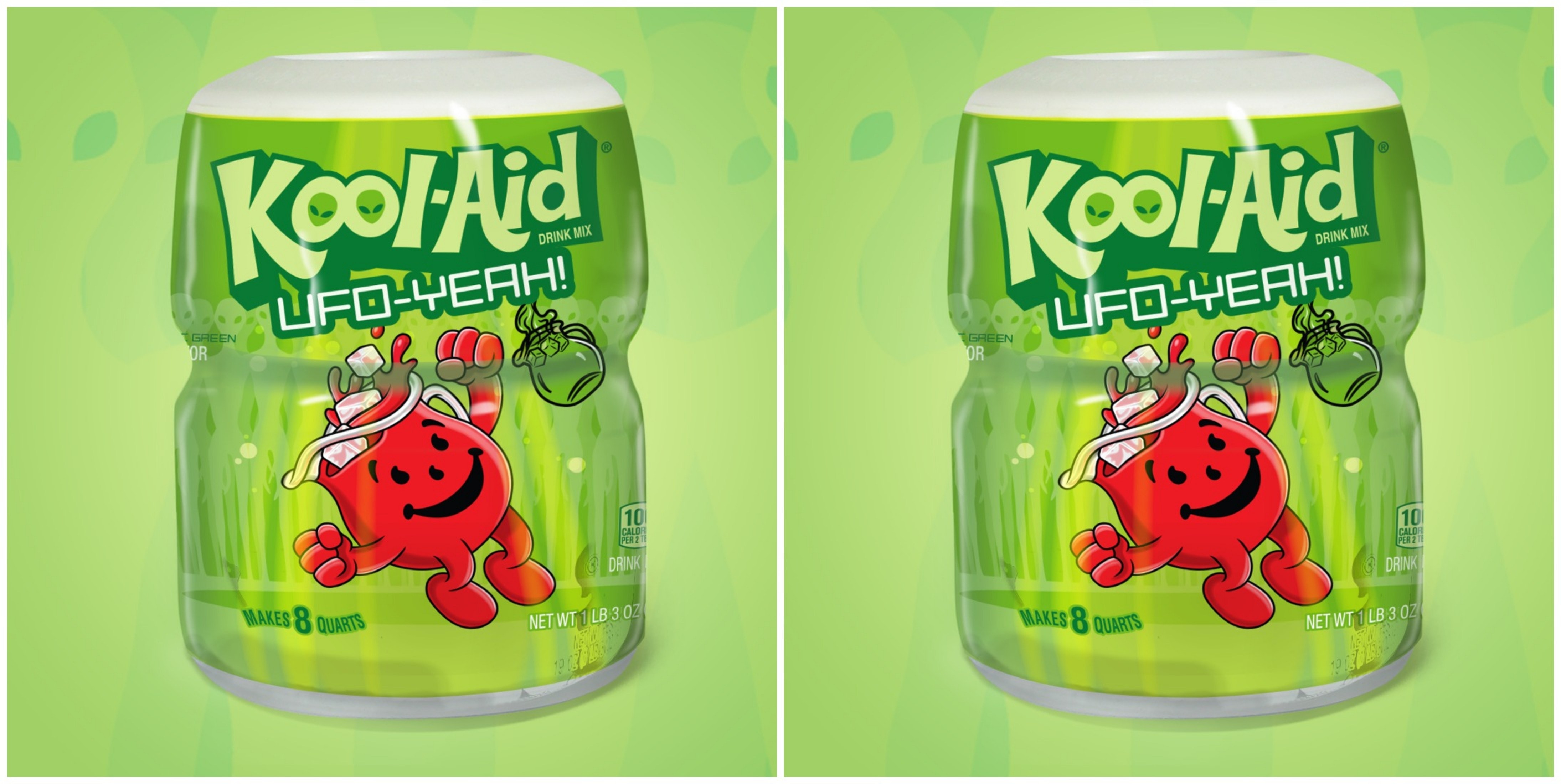 If youve been feeling like somethings been conspicuously missing from your life lately, its probably not just the memories the aliens stole from you when they abducted you last week; it might be the absence of an alien-themed, nostalgia-inducing drink mix. But hey, guess what? You can fix that now: Starting tomorrow, youll have the chance to win some alien-themed Kool-Aid on Twitter. The flavor is called UFO-Yeah Intergalactic Green; the label is covered with subtle images of little green men; and there are less than 1,000 cannisters of the stuff available. Better act fast if you want some.

Starting on Sept. 19, 900 cannisters of the limited-edition flavor will be up for grabs via social media. You can throw your hat in the ring by following the Kool-Aid Man on Twitter (@koolaid, of course) and tweeting with the hashtags #UFOYeah and #promo; doing so will put you in the running for winning a supply of UFO-Yeah Intergalactic Green Kool-Aid.

Its perhaps worth noting that its not exactly clear what flavor UFO-Yeah Intergalactic Green actually is; it wouldnt be unreasonable to assume it to be either a green apple flavor or a lime-based one, given its color but then again, given that Ecto-Cooler was green and tasted more like tangerine than anything else, I, uh guess all bets are off when it comes to what “green” actually tastes like in Kool-Aid Land. Regardless, the flavor is in celebration of Area 51 which, youll recall, was originally supposed to be the subject of a storming on Sept. 20 following the rapid rise to viral fame of a tongue-in-cheek public Facebook event created earlier this summer.

Now, its worth noting that Storm Area 51 itself isnt actually mentioned anywhere in the available publicity materials for the alien Kool-Aid flavor or giveaway right now but thats probably a good thing, given that the EDM festival that was supposed to have sprung up out of joke Facebook event has become mired in controversy.

In mid-August, Matty Roberts, who was the creator of Storm Area 51, announced Alienstock, a four-day event planned to take place the weekend originally pegged to Storm Area 51. Between Sept. 19 and Sept. 22, the New York Post reported, Alienstock would bring a world full of live music, arts, and camping under the stars to Rachel, Nevada the small town nearest the secretive government base. However, just last week, Roberts pulled out of the festival over concerns that the event was becoming a possible humanitarian disaster, as he put it in a statement released to several news outlets. (Indeed, the official website of the town of Rachel described the event as Fyre Fest 2.0.)

Roberts instead arranged for a different, free event to occur at the Downtown Las Vegas Event Center in Las Vegas, Nevada on Sept. 19; called the Area 51 Celebration, the event still has a top secret lineup which will only be uncovered when the event itself begins. Doors open at 7 p.m., with the music starting at 8 p.m., according to the events website. However, the organizers with whom Roberts split when he pulled out of Alienstock are reportedly still planning on holding the original festival, as well. Despite all the misinformation being spread around, the Alienstock event will absolutely still be happening in Rachel, NV from September 19th to the 22nd, a new website for the festival reads. The lineup for Alienstock has been announced and can be found at the aforementioned website.

I bring all this up because the timing of the UFO-themed Kool-Aid flavor and giveaway coincide precisely with when Storm Area 51, Alienstock, and the Area 51 Celebration are all meant to occur but whether or not they actually will happen (and, if they do, whether theyll be successes, disasters, or just kind of mediocre blips on the radar) is still a bit up in the air. So, is the flavor officially commemorating those events? Nope. Is it capitalizing on the renewed popular interest in Area 51 and UFOlogy theyve inspired? In the words of a certain sentient pitcher, OH YEAH.

On a related noted, do check out the Kool-Aid Mans Twitter account, even if you dont actually plan on entering the giveaway; I only very recently realized that it is, in fact, a work of genius. It consists entirely of different, increasingly creative ways to say OH YEAH on Twitter. I kid you not all the tweets that have emerged from the account is a variation on that theme.

And hey, if you do want to enter the giveaway, follow the Kool-Aid Man and send out a tweet or two using the hashtags #UFOYeah and #promo starting on Sept. 19. Good luck!