Imagine this. It’s the mid 2000s, and you’re a Swiss child, on vacation in the touristy mountain town of Interlaken. It’s beautiful. As beautiful as it’s possible for a town to be: crisp air and mountain streams and quaint European architecture. But you’re a kid. You don’t give a shit about any of that. You’re bored out of your tiny Swiss mind.

Then you see a TV commercial for a theme park called Mystery Park, with shots of a little girl gleefully running around a series of themed structures that look kinda like Disney World’s Epcot. Then she’s panning for gold, and jumping up and down on bungee cords, and there’s shots of spaceships, and pyramids, and sharks. True to its name, the contents of the park aren’t all that clear, but it definitely looks exciting.

After some parental begging, you arrive at the Mystery Park. The first of the themed areas you enter is in the shape of an Egyptian pyramid, and promises to explain the mysteries of ancient Egypt. Your imagination runs wild at the possibilities. Depending on which of Switzerland’s spoken languages you happen to be thinking in at that moment, the words “achterbahn” or “montagnes russes” or “roller coaster” might pop into your head as you picture the exciting experience that surely awaits you inside.

But once you enter, you find a movie theater and museum exhibit. And that exhibit/movie are here to tell you that EVERYTHING YOU THOUGHT YOU KNEW ABOUT ANCIENT EGYPT IS A LIE. Contrary to what your parents and teachers and Microsoft Encarta have been telling you, the Egyptians didn’t build the Pyramids using a complex system of sleds and ramps or whatever. They had power tools and electric lights—technology given to them by visitors from outer space, who may have also designed the structures. 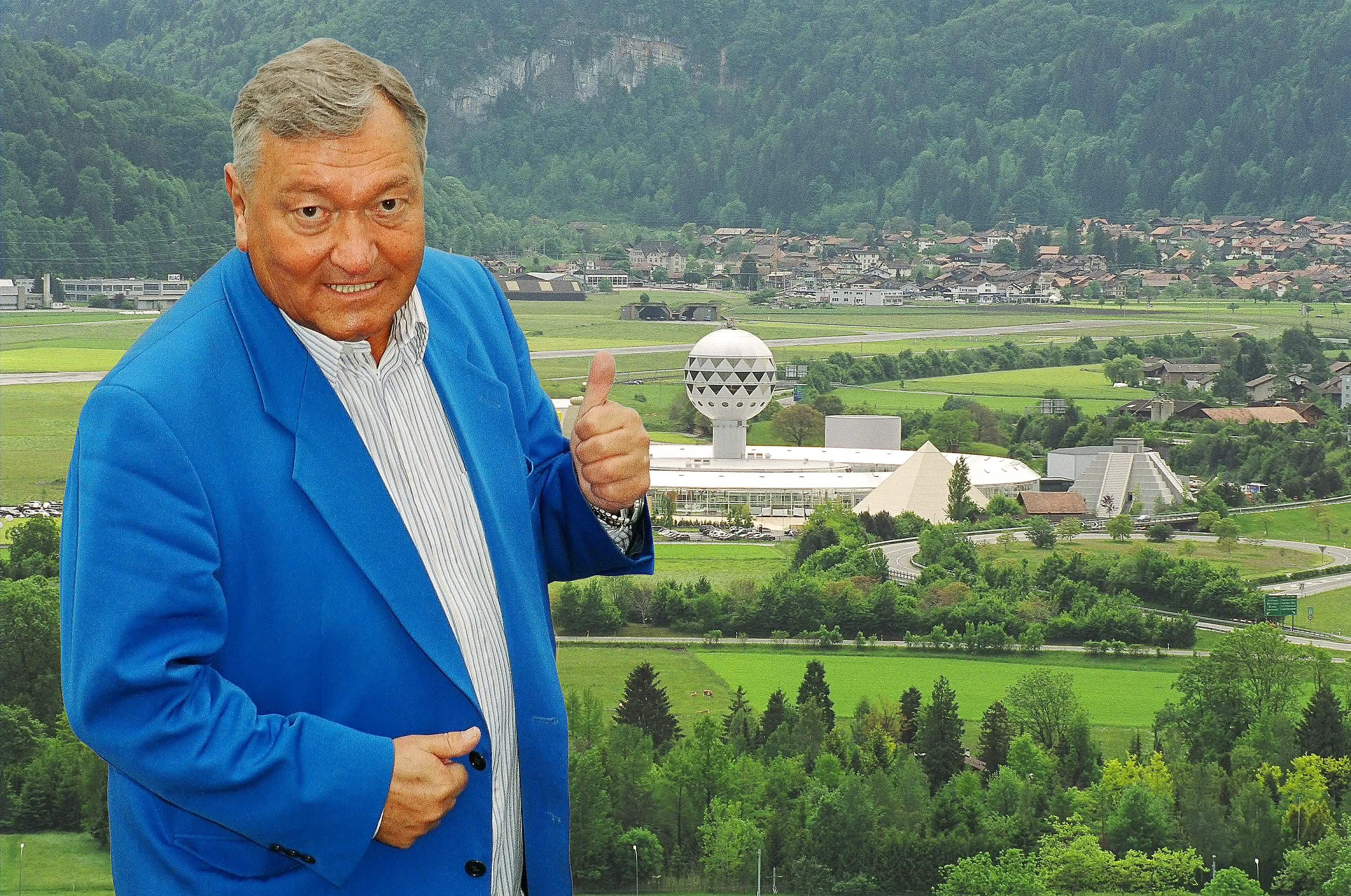 This exhibit, like most of the exhibits in the park, is based on the book Chariots of the Gods?, written in the late 60s by Erich von Däniken. The book puts forth the theory that aliens visited the earth in ancient times, and a bunch of things around the planet were either built using alien technology, or by early humans as a tribute to alien visitors. Like Stonehenge, Peru’s Nazca Lines, and the statues on Easter Island. Most of the evidence von Däniken presents to support his claims essentially boils down to: this ancient thing looks kinda sci-fi, and historians aren’t 100 percent sure how or why it was built… aliens?

The book struck a major chord. It’s sold over seven million copies. A documentary adaptation of it became the ninth highest earning movie of 1970, and received an Academy Award nomination for Best Documentary Feature. It’s inspired movies like Prometheus, Stargate, and that Indiana Jones film where Cate Blanchett vaporizes because she learns too many alien secrets. It also provided the source material for the History Channel show Ancient Aliens, which has been running for a decade, and is responsible for that image of that guy with the big hair saying “aliens.” AlienCon, an Ancient Aliens conference in Los Angeles, attracts 10,000 people each year.

Even now, half a century on, von Däniken says his book is converting people. “Just two weeks ago, I was [at a convention] in Pasadena and hundreds of people stood in line to get a book signed and they all say, ‘Mr. von Däniken your book changed my mind,’” he told VICE.

Unsurprisingly, von Däniken’s theories have been rejected by pretty much anyone who has the authority to reject a theory. From archeologists to South Park to the Southern Poverty Law Center. He’s also been accused of peddling demonstrably false information, and just making shit up.

But there’s no denying that his ideas are really, really popular. And when things get really, really popular— Harry Potter, Disney movies, the Bible, sex—people build theme parks devoted to them. So it makes sense that, in 2003, von Däniken teamed up with a group of Swiss businesspeople to open Mystery Park. 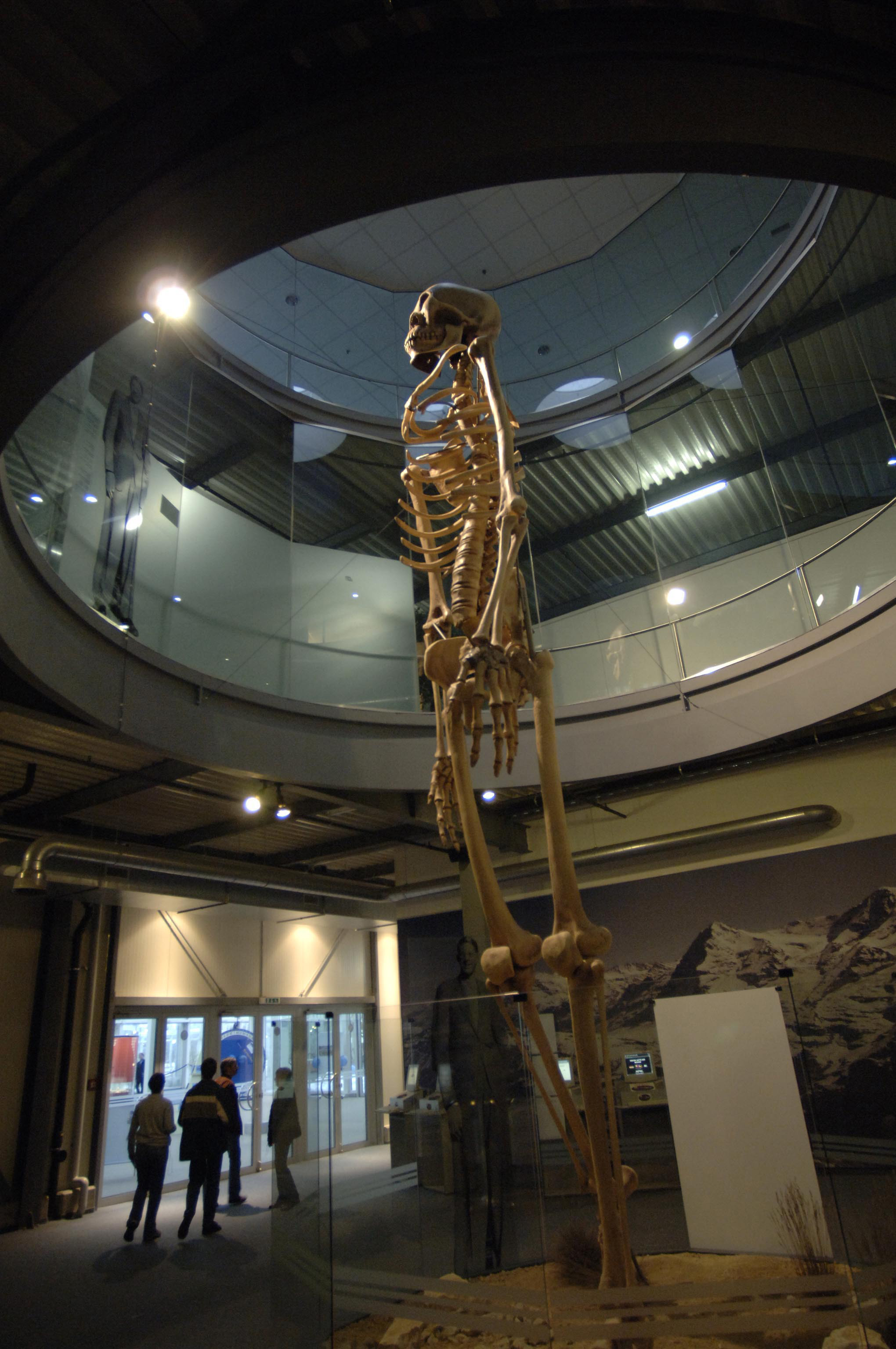 A model of a skeleton at the Mystery Park. Von Daniken believes that a now extinct race of giants used to exist on Earth. Photo via Bloomberg/Getty Images

Mystery Park is divided into seven themed “pavilions,” each located around a central tower. “In every pavilion there is a main show,” said von Daniken. “And leading to the main show, in every pavilion, small mysteries.”

There’s a pavilion with a flight simulator attraction, devoted to exploring the mysteries of Peru’s Nazca lines (i.e. that they were built as a landing strip for aliens). And one with a giant model of Stonehenge that comes alive with a laser and light show to reveal the secrets of the ancient stones (i.e. that they are a portal for aliens). Other exhibits explore the Mayan calendar, ancient Hindu texts, and the lost city of Atlantis.

When speaking to VICE, von Däniken blamed the park’s critics, its location, and a lack of advertising for the poor performance. “Maybe the location should have been nearer to a great city,” he said. “To Hamburg or Berlin.”

Local news reports said the museum’s exhibits were actually the problem because they’re static in a way that doesn’t inspire repeat visits. They also said a poor financial climate in Switzerland at the time harmed the park.

Whatever the case, Mystery Park had to close temporarily in 2006, before reopening with reduced hours and a new name (Jungfrau Park). A couple of changes were also made to its contents, with some of the attractions removed and replaced with things that don’t mention aliens. “In the Bible we have a prophet by the name of Ezekiel, and he describes how he saw a ‘chariot of the gods,’” von Däniken explained. “He describes the noise, the wings, the legs, the wheels in every detail, and we showed [that] in a pavilion. Very realistic. And this pavilion they closed completely because of the religious critics.” The new additions include an adventure playground and Segway rentals.

“I was of course very disappointed but I’m happy that the park at least is still open in some way,” said von Däniken. 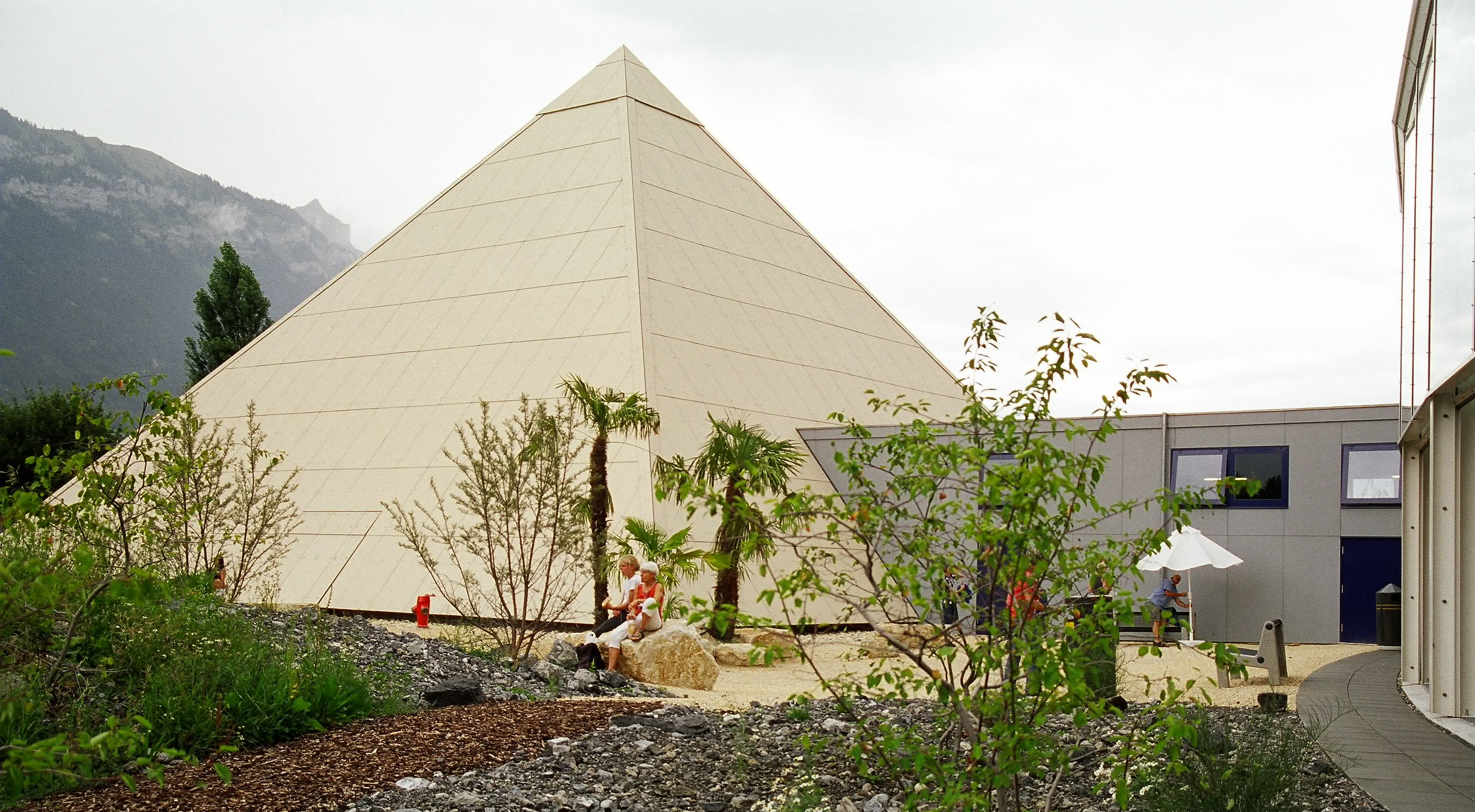 Recent Tripadvisor reviews of the park paint a bleak picture, with visitors complaining that the attraction is overpriced, rundown, and devoid of guests. Though von Däniken fans seem to be happy with it.

Given the park’s failure, you might be surprised to learn that another theme park based on von Däniken’s work is in development.

Construction is scheduled to start next year on Chariots of the Gods, an indoor amusement park in Blackpool, a seaside town in the north of England. The park is being developed by a company called Media Investment Entertainment, which controls the copyrights for von Däniken’s work. The theme park will be part of a $395 million mixed-use development that will also include a hotel, shops, and restaurants. 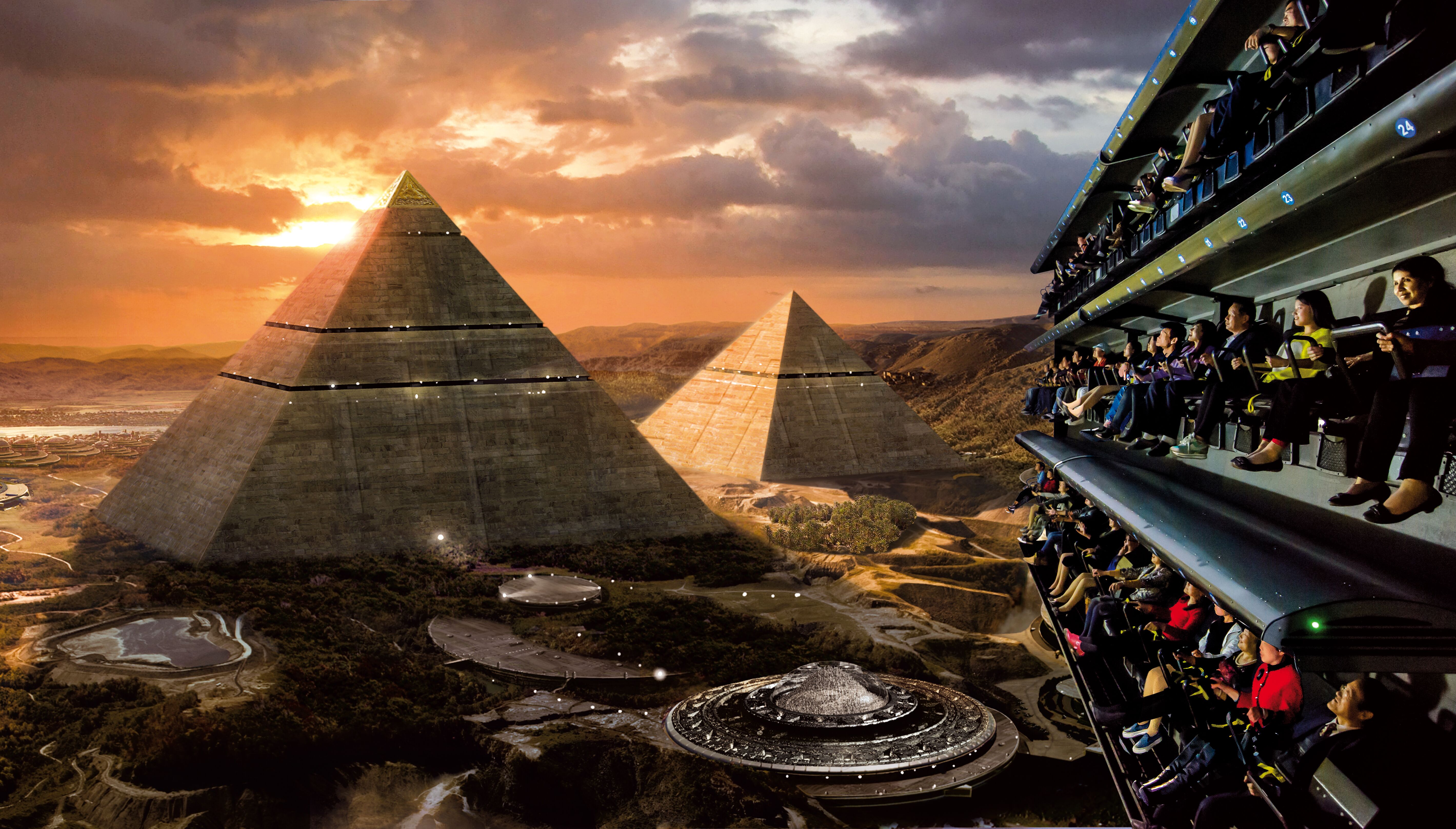 A rendering of the Chariots of the Gods park’s flying theater ride. Image courtesy of Media Investment Entertainment

According to Norbert Reichart, CEO of Media Invest Entertainment, the park will feature a diner, a ropes course, a VR attraction, and several rides. All will be themed around some aspect of von Däniken’s work. The biggest attraction will be a “flying theater,” similar to the Soarin’ rides found at Disney theme parks. According to Reichart, riders will fly across England, before traveling through Stonehenge (which, as a reminder, is a portal) to see the construction of ancient monuments around the world.

“We have also the world’s first multimedia interactive exhibition of Erich von Däniken’s Chariots of the Gods,” added Reichart.

Reichart was clear that his theme park will be different to the one in Switzerland. “The Mystery Park in Interlaken—to be honest, in my personal opinion—this is not a real amusement park,” he explained. “It was a great concept, but it was opened on the wrong location, and also the fun element was missing… [my company] had nothing to do with that park at all.”

As a development, the Chariots of the Gods park sounds like a good thing. Blackpool has a high rate of poverty and unemployment—a 2013 report by Britain’s Center for Social Justice called the town a “dumping grounds for people facing problems such as unemployment, social exclusion and substance abuse.” $395 million worth of development will no doubt be very well received. But I wondered if there might be people in the area that would prefer a $395 million investment that wasn’t designed around the beliefs of a person who thinks that Sodom and Gomorrah were destroyed by aliens using atomic bombs.

Reichart assured me this was not the case. “Not at all, surprisingly,” he said. “We expected some criticism or some questions, critical questions. Not at all. Nope…. People can be a little bit tired of all the superhero stories, and Hollywood stories, which have over saturated the [theme park] market. People are looking for something new and unique.”

“We believe we have a very unique offering here that does not exist anywhere else in the world,” he added.

Sign up for our newsletter to get the best of VICE delivered to your inbox daily. The Reptilian Aliens and the Council of the 13 ‘Royal’ Families