Expansion of the universe, thought to be further accelerated by dark energy, is flinging matter apart, while galaxies are being pushed away from each other. This is a challenge alien technologies will have to deal with in order for them to survive, Dan Hooper, a senior Fermi National Accelerator Laboratory scientist, writes in a new study. 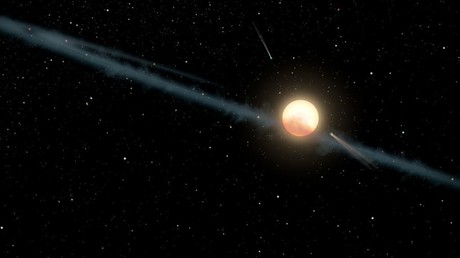 The paper looks at the use of megastructures, popularly known as Dyson spheres, which may theoretically be built around stars to harvest their energy. But it goes further than that, arguing that the huge balls of gas will also have to be shifted in their course so as not to escape the energy-hungry aliens.

“In order to maximise its access to useable energy, a sufficiently advanced civilisation would chose to expand rapidly outward, build Dyson Spheres or similar structures around encountered stars, and use the energy that is harnessed to accelerate those stars away from the approaching horizon and toward the centre of the civilization,” Hooper, who is also a professor of astronomy at the University of Chicago, writes.

While the futuristic scenario may or may not be already playing out somewhere in the universe, the study suggested that “any sufficiently advanced civilization” which is faced with the problem of possible isolation, will be prompted to start hunting for available stars in order “to secure as many of them as possible” before it is too late to reach them and extract their energy.

“Over the next approximately 100 billion years, all stars residing beyond the Local Group will fall beyond the cosmic horizon and become not only unobservable, but entirely inaccessible, thus limiting how much energy could one day be extracted from them,” Hooper writes.

Considering distances measured in billions of light years between us and the cosmic horizon, aliens could already be grabbing and moving stars, the study has admitted.

Hooper, however, remains skeptical that harvesting energy from stars can be something doable for humans at the present moment. But given that the human race will eventually reach the limit of our planet’s resources, the idea of fishing for stars to extract their energy may not seem so surreal in the future – unless some other race comes to snatch our Sun for their needs first.

Alien civilizations may be forced to capture stars and harness their energy using ginormous structures – all to keep themselves alive in the cold, ever-expanding vastness of universe, a Fermilab cosmologist believes. What If Aliens are Living Inside Earth? | BENDED REALITY.COM Göbeklitepe may be made by aliens, says mayor – Turkey News