Even before the first European settlers arrived on these shores in the 1600s, New England was hosting visitors from around the world. Yet some believe New England has also welcomed guests from much, much farther away. The first documented UFO sighting in America occurred here, as did the first widely publicized claim of alien abduction. Want to learn more about New England UFO sightings and alien encounters? Here are a few highlights from New England’s very own “X-Files.” 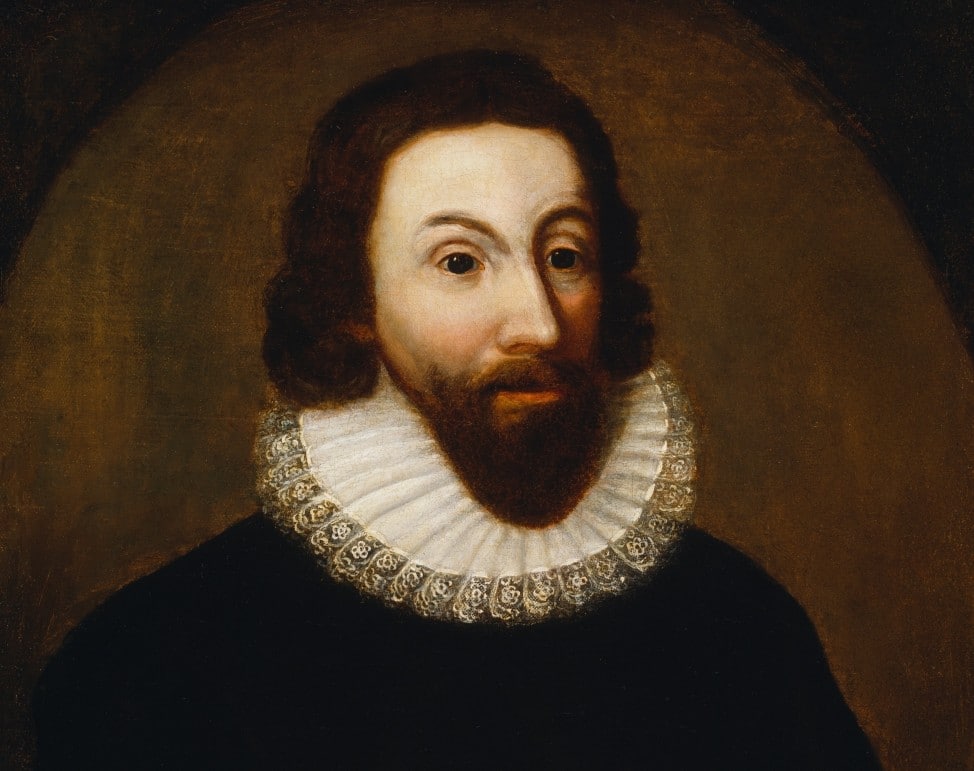 The first documented UFO sighting in America dates back to 1639, when Massachusetts Bay Colony cofounder and governor John Winthrop recorded a secondhand observation of unidentified objects in the sky over Boston. In his diary entry of March 1 that year, Winthrop wrote that a “sober, discreet man” named James Everell was rowing a boat up the Muddy River at night when he saw a “great light” in the sky. Winthrop reports that “when it stood still, it flamed up, and was about three yards square; when it ran, it was contracted into the figure of a swine: it ran as swift as an arrow towards Charlton [Charlestown], and so up and down about two or three hours.” By the time the lights moved away, Everell and his boatmates had been delivered one mile upstream, although they had no memory of how.

Cynthia Everett, a 24-year-old Massachusetts woman working as a schoolteacher in Camden, Maine, in 1808, recorded in her diary a somewhat similar account. Her entry on July 22 reads: “About 10 o’clock I saw a very strange appearance. It was a light, which proceeded from the East. At the first sight, I thought it was a métier [meteor], but from its motion I soon perceived it was not. It seemed to dart at first as quickly as light; and appeared to be in the Atmosphere, but lowered toward the ground and kept on at an equal distance sometimes ascending and sometimes descending.”

During the Cold War, the U.S. Air Force maintained a radar base on Vermont’s 3,438-foot East Mountain. Named the North Concord Air Force Station, this remote facility started operating in 1956. At the height of its operations, about 175 men worked at the station; they lived in a little Quonset hut village (complete with store, bowling alley, and theater) about a mile down the mountain. In 1961, according to military reports, a strange object appeared in the skies above East Mountain and remained visible for about 18 minutes. Given that the events involving Barney and Betty Hill (below) happened just a short time later, some assert that this was the same UFO. The base closed in 1963 and now sits abandoned. 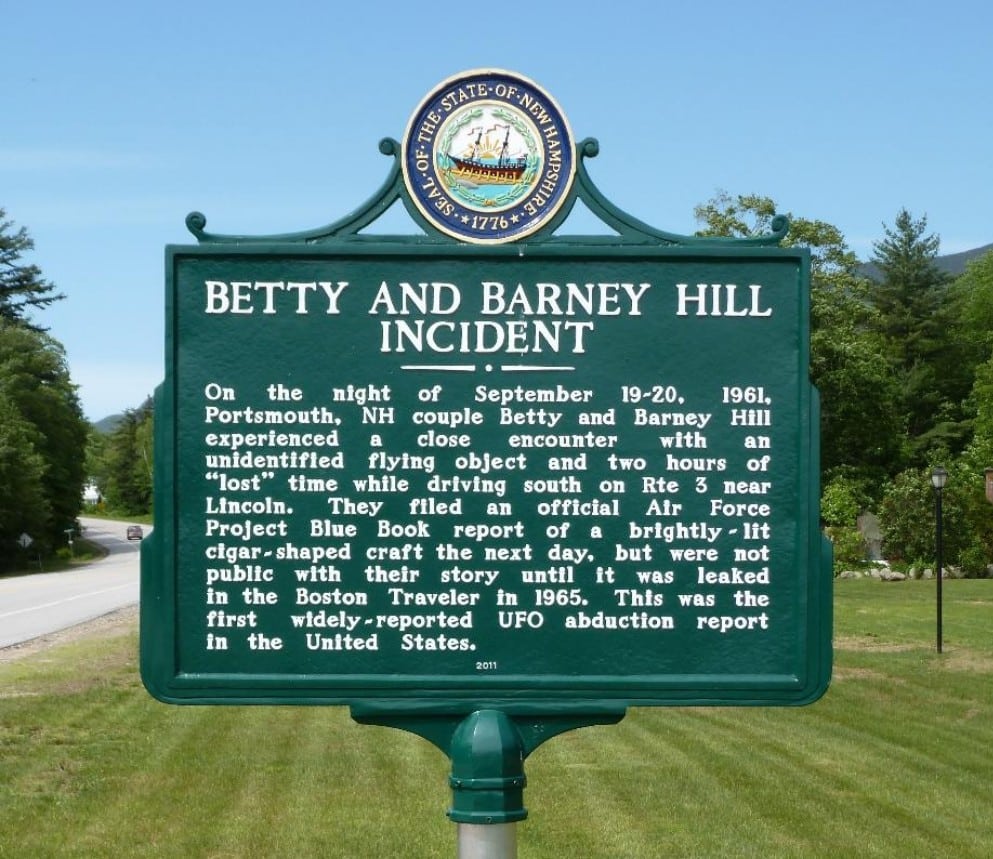 In July 2011, the state of New Hampshire erected this sign near the site of the Hill encounter in the White Mountains.

The first widely publicized report of an alien abduction in the United States was that of Betty and Barney Hill. The Portsmouth, New Hampshire, couple claimed to have been taken by extraterrestrials near Franconia Notch on the night of September 19, 1961. According to their account, the Hills saw a bright light in the sky while driving home at about 10:30 p.m. Betty thought at first it was a shooting star, but then it changed direction and moved upward. They stopped the car for a closer look, and through binoculars they saw an odd-shaped craft flashing multicolored lights. As they drove away, the craft, which they estimate was at least 40 feet long, followed them, eventually descending so low over their 1957 Chevy that they stopped the car. Again using binoculars, Barney saw humanoid figures in black uniforms through the ship’s windows. The Hills drove away at high speed. They heard some buzzing and beeping sounds, experienced a tingling sensation, and blacked out. When they regained consciousness, they had traveled nearly 35 miles south, although they didn’t recall the journey. Later, under hypnosis, the Hills described being taken onto the ship, where they were separated and examined. Their story was adapted by journalist John G. Fuller into the best-selling 1966 book The Interrupted Journey and the 1975 television movie The UFO Incident.

On September 3, 1965, one of the most famous UFO events of all time occurred in Exeter, New Hampshire. As with the Hill incident, this was also turned into a 1966 bestseller by John G. Fuller, called Incident at Exeter. Fuller reports that a policeman patrolling Route 101 just after midnight stopped to check on a woman parked beside the road. The breathless woman claimed that a flying object with red flashing lights had been chasing her. A few hours later, an 18-year-old man arrived at the Exeter police station and claimed that while hitchhiking along Route 150, he’d seen a line of five bright lights over a house about 100 feet from where he stood. He said the lights moved out over a large field and disappeared and reappeared behind the tree line several times. After driving to the site with the young man, the same policeman witnessed the lights, as did another officer who arrived a short time later. Over the weeks that followed, authorities received about 60 reports of UFO sightings near Exeter. Debunkers have claimed that the described light patterns would match those on an Air Force KC-97 refueling plane, but officially the Exeter sightings remain a mystery. 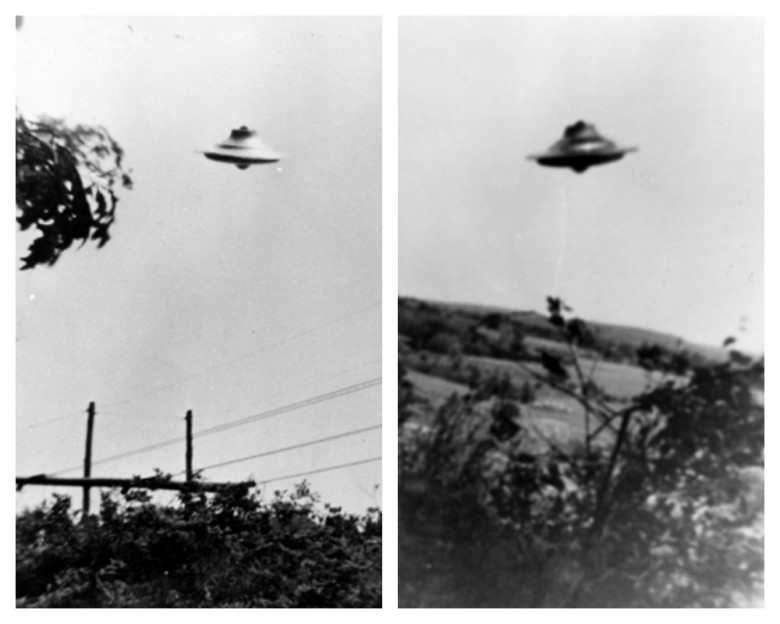 Details from two of the seven “flying saucer” photos snapped by Harold Trudell near his home in Rhode Island in 1967.

At midday on June 10, 1967, Harold Trudel pulled to the side of West Wrentham Road near East Woonsocket, Rhode Island. The 29-year-old man reputedly had seen unidentified objects in the area before, and on this day he was determined to document them. According to his account, he didn’t have to wait long, as a metallic, dome-shaped object soon approached. As the UFO hovered over the power lines, Trudel snapped pictures for about five minutes. He captured seven images, which would become some of the most iconic UFO photos of their day (but which sure look a bit hokey now).

In August 1976, according to their own accounts, four Massachusetts college students went canoeing on Maine’s Allagash Wilderness Waterway and saw an unidentified object in the sky. They described the sighting to a ranger the next day but weren’t taken seriously: It was suggested, in fact, that they had seen a searchlight that was being used to celebrate the grand opening of a hardware store in Millinocket. The students continued their trip and did not talk much about their encounter until years later, when one of them, Jim Weiner, started having seizures. Weiner claimed to have had visions of humanoid beings levitating above his bed, poking him with needles. Under hypnosis, all four men described small gray aliens taking them aboard a spacecraft and performing medical examinations on them. The 1993 book The Allagash Abductions made momentary media darlings out of the quartet, who appeared on The Joan Rivers Show and Unsolved Mysteries. In 2016, however, one of the men, Charlie Rak, said that although the group really did see unidentified flying objects twice during their canoe trip, the rest of the story had been made up. His former friends dispute this. 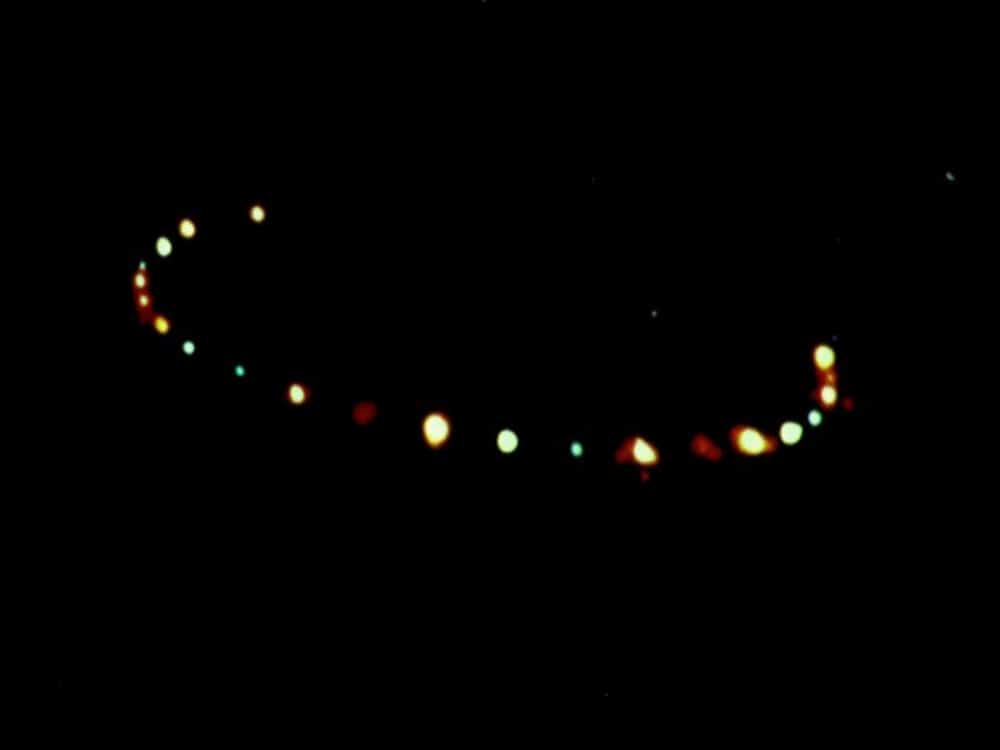 Randy Etting captured this image of lights above Newtown, Connecticut, in 1987.

On May 26, 1987, commercial airline pilot Randy Etting took a nighttime walk near his home in Newtown, Connecticut. He often studied the skies when he walked, trying to identify passing planes. At around 9:45, he observed some orange and red lights approaching from the west. He got his binoculars and called his neighbors to come outside. Etting said that as the UFO passed over Interstate 84, cars pulled over to watch. And indeed, between 9:30 and 10:15 P.M., more than 200 people phoned police to report a UFO. The object displayed a semicircular pattern of very bright multicolored lights. Several drivers reported that their cars had lost power as the lights passed by. About 15 minutes later, calls started coming in from New Milford, about 14 miles north, alerting authorities that the lights — reported by many to be connected to an object “larger than a football field” — were hovering there. The lights eventually vanished, but the mystery remains.

Know of any other New England UFO sightings or alien encounters? Let us know below!

This post was first published in 2017 and has been updated.

The post Aliens in New England? A Timeline of UFO Sightings and Unusual Encounters appeared first on New England Today. 10 Places As Mysterious As The Bermuda Triangle