People who hunt for ‘the truth’ must be getting pretty exasperated at the public’s lack of belief in aliens. Sure, back in the Roswell days, no one had decent enough technology to capture these beings; but now civilians have highly sophisticated machines and still NO ONE IS LISTENING.

But the team at YouTube channel thirdphaseofmoon reckon they’ve finally got something that will prove the haters wrong.

Tim Doyle and Tracey Su travelled to where they claim is the super secretive Area 51. They parked their car on the fringe of the infamous base in the dead of night and used their technical instruments to see whether they could detect anything.

As they were on their stake out, a car drove near them, with Tim reckoning it was a surveillance vehicle keeping tabs on them.

He tells the camera: “That’s why we’re here. We’re on public land and we’re not going to let them push us off here. We’re just here to look for lights in the sky and if they’re here, we’re going to find them.”

Funnily enough, they found shit all that night. But they didn’t walk away empty handed. 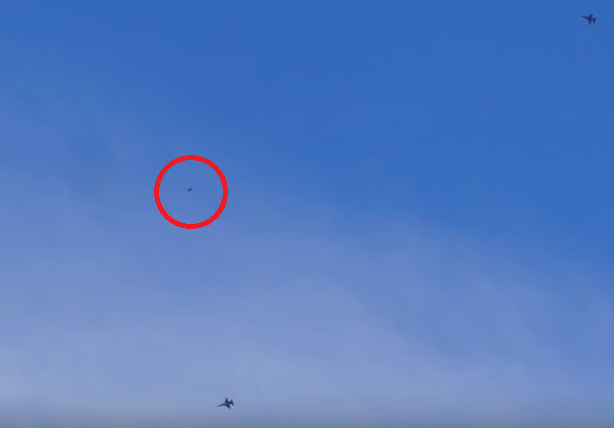 The next morning, Tracey took a few snaps of some military planes.

When they returned from their journey, they uploaded the photos and found something interesting. They zoomed in and spotted two military plane and a mysterious ‘third object’. Oooooooo.

“What in the world is this?” asks Tim. “It looks like some kind of triangular unmanned drone because it’s definitely too small to have a person inside of it. And after reviewing the pictures, it definitely looks as though the three crafts are interacting with each other.”

It literally looks like it could be anything from a bird, a plane or a fly. But sure, it could also be an alien spacecraft.

The video has sparked a flurry of comments, both supportive and negative.

One person affectionately wrote: “They’re pushing the alien agenda big time. It’s all a false flag/Satan’s deception. Order out of chaos, with an outside threat the [New World Order] would be formed easily.”

However, this person wasn’t as convinced: “Let’s do a quick recount here, so you guys bring all these high tech expensive equipment, video record everything day and night, even the camo guys but the only hard evidence of UFO you guys take is in steady photos, just pictures no video. What kind of joke is this guys?﻿”

The video ends with what thirdphasemoon claims is the ‘clearest’ picture ever recorded of Area 51, with some dramatic music and a recording of John F Kennedy being sworn in as President for extra effect.

Is this the evidence we’ve all been waiting for?