Wow, it looks like Bill Gates has got some competition in the bourgeoisie’s ‘Top Ten Most Banterous Moments Of 2017’ list, after Elon Musk led crowds across California to believe they had seen a UFO. Watch what they saw here:

In a moment reminiscent of Orson Welles’ 1938 broadcast of War of the Worlds, local television stations – as well as law enforcement agencies – reportedly received a number of telephone calls from witnesses worried about what they were see in the sky.

However, the reality was that the weird lights in the sky were part of tech giant SpaceX’s ‘Vandenberg launch’. 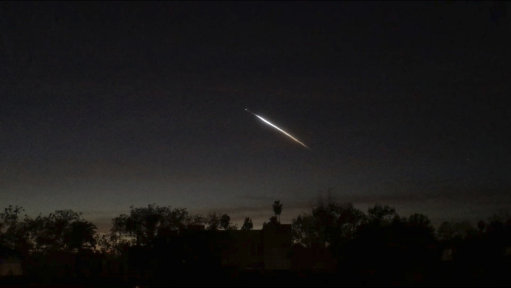 One news report said that at least 130 people in just a single area of Los Angeles County called 911 on Friday evening. They were informed that the lights were a rocket launch from Vandenberg Air Force Base in central California.

Elon Musk, the CEO of SpaceX, joked on Twitter that the object in the sky was a ‘nuclear alien UFO from North Korea’.

A number of celebrities joined fellow social media users in questioning what the mysterious light was.

Singers will.i.am and Billy Ray Cyrus asked what the streak was, and skateboarding legend Tony Hawk asked: “What is this in the sky?”

Here’s what people were saying:

There is absolutely an alien worm hole that just opened up over LA. I am fine with this. Welcomed. Hope the M.I.B don’t show up to tell me it’s a weather ballon or some lie. THIS IS ALIEN! pic.twitter.com/ywSt1Exf5D
– Keegan Allen (@KeeganAllen) December 23, 2017

I’m calling bullshit on SpaceX’s excuse. That shit’s a UFO and there’s been others that have been seen that are just like it!!
– Demi Lovato (@ddlovato) December 23, 2017

Does anyone know what we just saw in the skies above San Diego? pic.twitter.com/EFNBh87Hc8
– Tony Hawk (@tonyhawk) December 23, 2017