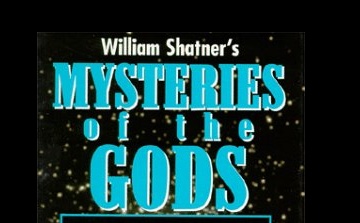 It was inevitable. As 2019 starts a new special, Ancient Aliens Season 13, episode 14, brings in the most ancient astronaut of TV fame: there is William Shatner giving advice to Giorgio and the crew.

You have to love it. This is a special edition for sure. Cross-pollination is one of History Channel’s favorite Venerable Bede compliments. There is no one from outer space more ancient than Shatner. Where has he been for a 100 other episodes?

The reason for his appearance is to honor Erich Von Daniken. In 1976 Shatner made a movie called Mysteries of the Gods, which adapted more or less from one of Daniken’s books. Hence, the honor from History Channel. Clips of young Shatner appear, but no mention comes of Leonard Nimoy’s series In Search of…, which History is also remaking with the new Spock.

The two-hour special is meant to be homage to Von Daniken’s amazing career since the 1960s when he burst onto the scene with his outlandish theories. We read Chariots of the Gods in 1968, before most the guests on this special were born.

We recall being surprised and more than a little confused as to why no one else had seen what the author revealed. It was mind-boggling, but then again so was 2001: A Space Odyssey.

Now, he has more credibility than Carl Sagan. Indeed, the special has a clip of Sagan looking pathetic, attacking the notion of Ancient Aliens. Today, if the astronomer were still alive, he’d be ripe to serve as Trump’s Acting Ambassador to Mars.

The show manages to do catalogue all the movies, TV shows, and other documentaries that had direct influence from Von Daniken: they also admit that Arthur Clarke and Stanley Kubrick slightly preceded him.

Von Daniken reveals his Jesuit education that influenced him, and he also discusses how his background in hotel management ruined him with academics and their Ph.D.-union card prejudice.

As one with a doctorate, we feel as do some NASA people and Dr. Travis Taylor, that lack of degree means nothing when it comes to creative minds.

This latest entry seems a premature obit for Erich Von Daniken, or eulogy in anticipation. It does not detract from his remarkable veracity.